Modern Philosophies of the Will 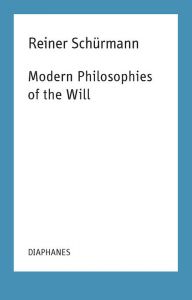 pre-order
Through Kant, Nietzsche, and Heidegger, this seminar traces the development of the relation between the will and the law as self-given.
Topic areas include: the ontological turn in philosophy of the will; from obligation to self-overcoming, to “decision;” the will's playful character and the problem of teleology; the will as principle of morality (Kant), of life­forms (Nietzsche),  and of technology (Heidegger); the formal identity of legislation and transgression of the law.
The seminar traces three “strategies” in the development of the philosophy of will from Kant to Heidegger, viz. rationality and irrationality of the will, the ontological turn, and law.
Reiner Schürmann (1941–1993) was a German philosopher. He was born in Amsterdam and lived in Germany, Israel, and France before immigrating to the United States in the 1970s, where he was professor and director of the Department of Philosophy at the New School for Social Research in New York. He is the author of three books on philosophy: Heidegger on Being and Acting, Wandering Joy, and Broken Hegemonies. Origins is his only work of fiction. He never wrote nor published in his native German.
pre-order
Edited by Kieran Aarons and Francesco Guercio.
2021 (publication expected by 1st quarter)
English edition
13,5 x 21 cm (softcover)
128 pages
30.00 €
ISBN : 978-3-03580-307-5
EAN : 9783035803075
forthcoming
Reiner Schürmann: other titles