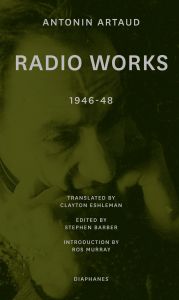 order
wishlist
The translated transcripts of two radio broadcasts by Artaud: To have done with the judgement of god (1947-48) and Madness and Black Magic (1946). Correspondences from that period are also included.
In the last two years of his life, following his release from the Rodez asylum, Antonin Artaud decided he wanted his new work to connect with a vast public audience, and chose to record radio broadcasts in order to carry through that aim. That determination led him to his most experimental and incendiary project, To have done with the judgement of god, 1947-48, in which he attempted to create a new language of texts, screams, and cacophonies: a language designed to be heard by millions, aimed, as Artaud said, for “road-menders”. In the broadcast, he interrogated corporeality and introduced the idea of the “body without organs”, crucial to the later work of Deleuze and Guattari. The broadcast, commissioned by the French national radio station, was banned shortly before its planned transmission, to Artaud's fury.
This volume collects all of the texts for To have done with the judgement of god, together with several of the letters Artaud wrote to friends and enemies in the short period between his work's censorship and his death. Also included is the text of an earlier broadcast from 1946, Madness and Black Magic, written as a manifesto prefiguring his subsequent broadcast. Clayton Eshleman's extraordinary translations of the broadcasts activate these works in their extreme provocation.
French dramatist, poet, essayist, actor, and theater director Antonin Artaud (1896-1948) is one of the seminal figures of twentieth century writing, art and sound experimentation, known especially for his work with the Surrealist movement, his performance theories, his asylum incarcerations, and his artworks which have been exhibited in major exhibitions, at New York's MoMA and many other art-museums.
order wishlist
Edited by Stephen Barber.
Introduction by Ros Murray.
Translated from the French by Clayton Eshleman.
published in November 2021
bilingual edition (English / French)
12 x 19 cm (softcover)
128 pages
15.00 €
ISBN : 978-3-03580-250-4
EAN : 9783035802504
in stock