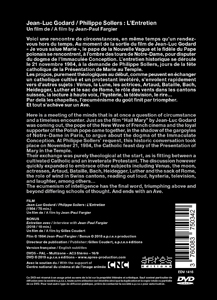 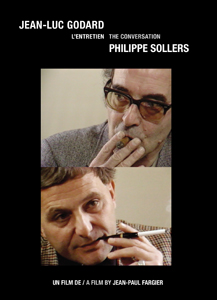 order
Jean-Paul Fargier's film about the historical encounter between the filmmaker and the writer in 1984.
Here is a meeting of the minds that is at once a question of circumstance and a timeless encounter. Just as the film “Hail Mary” by Jean-Luc Godard was coming out, the pope of the New Wave of French cinema and the loyal supporter of the Polish pope came together, in the shadow of the gargoyles of Notre-Dame in Paris, to argue about the dogma of the Immaculate Conception. At Philippe Sollers' request, this historic conversation took place on November 21, 1984, the Catholic feast day of the Presentation of Mary in the Temple.
Their exchange was purely theological at the start, as is fitting between a cultivated Catholic and an inveterate Protestant. The discussion however quickly expanded to embrace other subjects including Venus, the moon, actresses, Artaud, Bataille, Bach, Heidegger, Luther and the sack of Rome, the role of wind in Swiss cantons, reading out loud, hysteria, television, and laughter, among others…
The ecumenism of intelligence has the final word, triumphing above and beyond differing schools of thought. And ends with an Ave.
Jean-Luc Godard (born 1930 in Paris) is a Franco-Swiss filmmaker. A central figure of the French New Wave (Breathless, Contempt, Pierrot le fou…), and a promoter of a political cinema (with the Dziga Vertov Group), Jean-Luc Godard is one of the great names of Cinema history.