Critique – The Stakes of Form 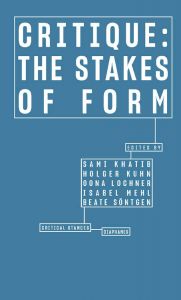 order
An ensemble of essays on the multifarious forms of the critique, showing how these forms are determined by their study object, and how it translates into critical stances.
Critique is a form of thinking and acting. It is determined by its objects, yet never accesses them immediately but is always mediated through its own forms of (re)presentation. Since the end of the 18th century, there has been a dynamization and fluidization of the understanding of form, as topoi such as the break, the marginalization, the tearing and opening indicate. However, these multifarious attempts to “build on the structure through demolition” (Benjamin) testify to the dependence of all articulation on the forms of (re)presentation [“Darstellung”]. As a philosophical problem, the question of form arises in critical theory from Marx to Adorno. Since the 1960s, literary practices have proliferated which generate their critical statements less argumentatively than through the programmatic use of formal means. At the same time, the writing self, along with its attitudes, reflections, affects and instruments, visibly enters the critical scene—whereas the theatrical scene as a stage of critique has been contested intensively during the 20th century. This volume examines how the interdependence of critique, object, and form translates into critical stances, understood as learnable, reproducible gestures, which bear witness to changing conditions and media of critical practice.
order
Edited by Sami Khatib, Holger Kuhn, Oona Lochner, Isabel Mehl, Beate Söntgen.
Texts by Maria Fusco, Eva Geulen, Thomas Glaser, Birgit M. Kaiser, Sami Khatib, Sebastian Kirsch, Chris Kraus, Holger Kuhn, Oona Lochner, Isabel Mehl, Bettine Menke, Beate Söntgen, Heiko Stubenrauch, Kathrin Thiele, Lynne Tillman, Masha Tupitsyn, Mimmi Woisnitza.
published in July 2020
English edition
12 x 20 cm (softcover)
352 pages (b/w ill.)
25.00 €
ISBN : 978-3-03580-240-5
EAN : 9783035802405
in stock
table of contents 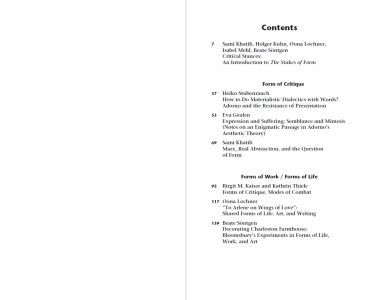 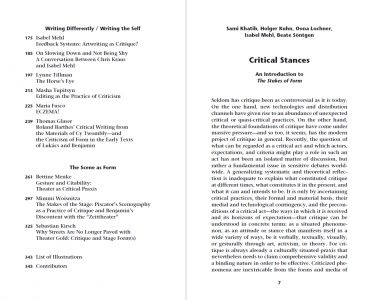 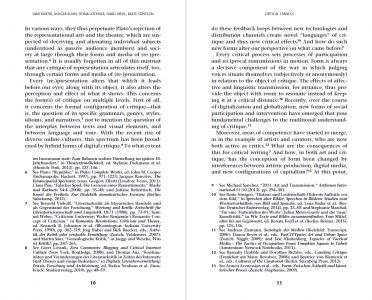 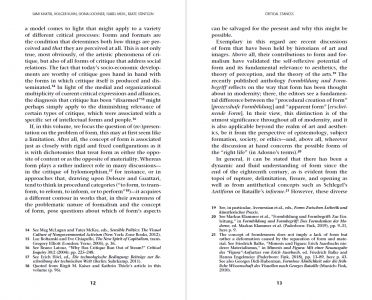 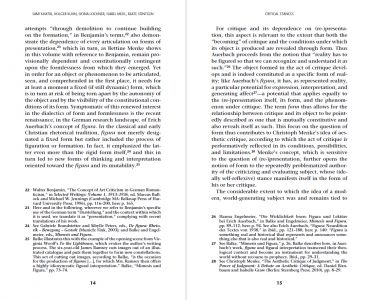