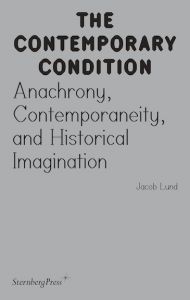 order
This theoretical essay advocates for the overcoming of the dominant notion of the contemporary as the point of departure for the development of (art-) historical imagination.
Taking its point of departure in an “anachronic” exhibition, “Soulèvements” (2016–18), this book is a theoretical exploration of how the notion of contemporaneity—understood as the coming together of different times in the same historical present—relates to the end of a certain history of art. Critical of hitherto dominant chronological, ahistorical, and/or culturally restricted notions of the contemporary, Lund’s overall aim is to make an argument for “the contemporary contemporary” as the point of departure for any anachronic relationship with time today, and as the inescapable point of departure for any possible historical imagination.
This book is the volume 13 of “The Contemporary Condition” series, edited by Geoff Cox and Jacob Lund and published with Aarhus University, and ARoS Art Museum (Denmark). The aim of the series is to question the formation of subjectivity and concept of temporality in the world now. It begins from the assumption that art, with its ability to investigate the present and make meaning from it, can lead to an understanding of wider developments within culture and society. Addressing a perceived gap in existing literature on the subject, the series focuses on three broad strands: the issue of temporality, the role of contemporary media and computational technologies, and how artistic practice makes epistemic claims.
Jacob Lund is Associate Professor of Aesthetics and Culture at Aarhus University in Denmark since 2011.
order
Edited by Geoff Cox and Jacob Lund.