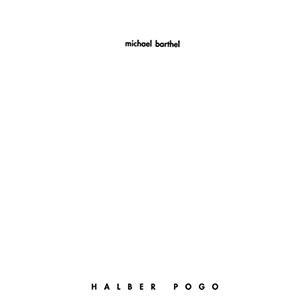 order
Second full-lenght release by German sound-poet and writer Michael Barthel on Tochnit Aleph. A 60-minute piece recited from memory. Recorded April 2018 straight to tape without overdubs. Raw, unsettling, poetically incorrect.
“Halber Pogo (half a pogo) is a 60 minute recording in which scripted text-pieces are recited from memory. The selection of the pieces is left up to the moment, as much as how much content of each piece is remembered; along with their actually determined pronounciation - that often buggers off. This inaccuracy, the resulting pauses, the sensuality that arises from these circumstances, is what is of interest to Halber Pogo.”
Michael Barthel (born 1977 in Berlin, lives and works in Leipzig) has been working in the fields of musique concrete, noise compositions, concrete phonetic poetry and fine arts since the mid 1990's, first with his project The Nautilus Deconstruction, and since the early 2000's under his own name, moving away from his earlier personal harsh noise collage works towards more conceptual direct sound-poetry and outsider musique concrete compositions. Using mostly just his own voice and tape-machines, Barthel creates very poetic and mysterious environments. By means of their brutal simplicity, fragility and lo-fi aesthetics his pieces manage to captivate and shock on a very emotional level.
Michael Barthel manages his own gallery Kunstraum Barthel in Leipzig.
order
published in October 2018
six-panel CD digipack
14.00 €
in stock