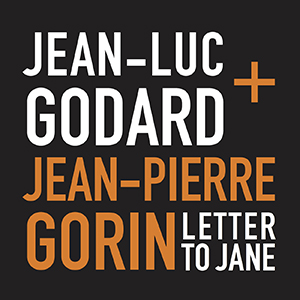 wishlist
Taking as a point of departure a photograph of actress Jane Fonda in Vietnam, Jean-Luc Godard and Jean-Pierre Gorin reflect on the role of intellectuals in the revolutionary process. Originally published in 1972, this Letter to Jane is one of the last texts issued by the two founders of the Dziga Vertov Group.
Letter to Jane was originally published in 1972 by Jean-Luc Godard and Jean-Pierre Gorin, in the French avant-garde literary magazine Tel Quel. The essay was written as a letter to Jane Fonda in which Godard and Gorin reference an image of the actress from the article “Retour de Hanoï”(Returning from Hanoi), published that summer in the magazine L'Express. The two filmmakers decided to use this image to promote their film Tout va bien, starring the actress and released the same year. Their letter was also turned into a short film, Letter to Jane, narrated by the authors and released as a postscript film to Tout va bien.
See also Pier Paolo Pasolini: The Ashes of Gramsci; John Cage: Other People Think (edited by Alfredo Jaar).
Jean-Luc Godard (1930-2022) was a Franco-Swiss filmmaker. A central figure of the French New Wave (Breathless, Contempt, Pierrot le fou…), and a promoter of a political cinema (with the Dziga Vertov Group), Jean-Luc Godard is one of the great names of Cinema history.