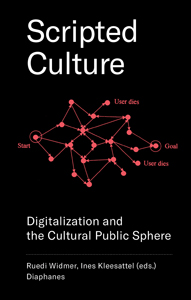 order
The cultural public sphere at the digital age.
When we look at the cultural public sphere through the lens of digitalization, a paradoxical picture emerges. In some ways, the digital age seems to have brought the goals of the Enlightenment to their fullest fruition, giving us boundless and instantaneous access to every kind of knowledge and art. But the internet and its platforms also frequently bring chaos, immersing us in a sphere of often unverified information whose scope is unimaginable. This book takes a tour through the current debates on digital culture, bringing together a wide array of perspectives from aesthetic theory, cultural studies, electronic media, and the arts.
Ines Kleesattel is an art historian and cultural theorist. She researches into multi-perspective art-related practices of knowledge, documentary fiction, and political-aesthetic theory and praxis. She writes for various magazines as a freelance art critic.

Ruedi Widmer is responsible for the subject of culture journalism and for the Masters course in »publizieren & vermitteln« at the Zurich University of the Arts. He studied film and philosophy at the University Paris VIII and at the University of Zurich and then worked as journalist and publisher in the areas of film, media, design, art and culture (including for Neue Zürcher Zeitung, Hochparterre, Weltwoche, MAGAZIN, Jahrbuch CINEMA). Most recently he published contributions in newspapers and books on culture journalism in the context of media change, on American drama series, and on the design dimension of journalistic media in Switzerland.
order
Edited by Ines Kleesattel and Ruedi Widmer.
Texts by Ines Kleesattel, Ruedi Widmer, Eva Mackensen, Frédéric Martel, Dieter Mersch, Felix Stalder, Simon Grand, Christoph Weckerle, Donat Kaufmann, Daniela Weinmann, David Simon, Jörg Scheller, Corinne Gisel, Lora Sommer, Frédéric Martel, Remo Bitzi, Mathis Neuhaus.
published in April 2018
English edition
12,5 x 20 cm (softcover)
288 pages
30.00 €
ISBN : 978-3-0358-0085-2
EAN : 9783035800852
in stock
table of contents