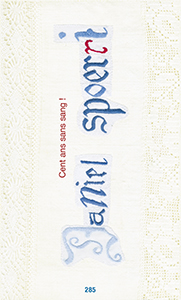 order
wishlist
Celebrating the 100th title in the “L'art en écrit” series, this leporello by Daniel Spoerri plays on the homonyms of the word “cent,” as a tribute to Marx Ernst.
Gathering, surrounding, exploring, sticking, hijacking, immortalizing, collecting, so many words which can define Daniel Spoerri's work. Along his career, he incited the viewer to interact with often unexpected, odd, prankster or even wild works. Captivates by words, as his famous “pièges à mots” can attest, he gives pride of place to them in Cent ans sans cent ! For the hundredth title of the collection “L'art en écrit,” he plays on the homonyms of the word “cent” (100), kind of tribute to La Femme 100 têtes by Max Ernst. Using the multiple meanings given to an unique sound, would Spoerri compose, in one sentence, a true pacifist commitment?
Also available in a limited edition with an original artwork signed by the artist.
order wishlist
Introduction by Daniel Spoerri.
published in November 2017
bilingual edition (German / French)
leporello, 12,5 x 21 cm (folded)
48 pages
18.00 €
ISBN : 978-2-37229-028-9
EAN : 9782372290289
in stock 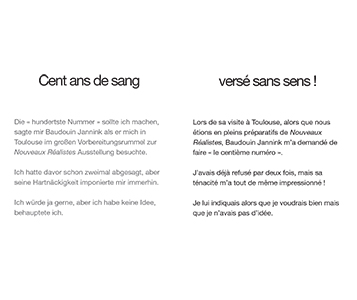 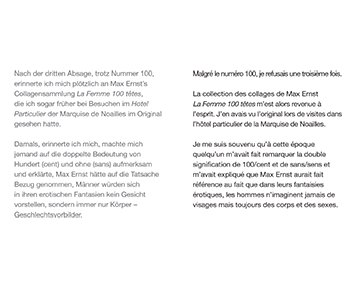