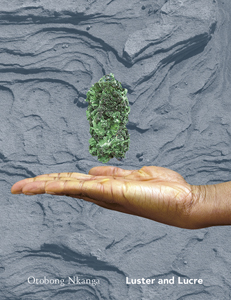 order
First monograph documenting a three-year research on the mineral mica that became the ground for multidisciplinary outcomes, including poems, intricate drawings, modular sculptures that form systems of display, and performances.
Otobong Nkanga's first monograph, Luster and Lucre, charts an intensely productive period from 2013 to 2016, which includes exhibitions at the 8th Berlin Biennale; Portikus, Frankfurt am Main; KADIST, Paris; and M HKA, Antwerp. Its title encapsulates the complex concerns that underpin these shows: “luster,” the illustrious shining of materials; and “lucre,” profits and gains.
With the mineral mica as her starting point, Nkanga's research took her to archives in Berlin, Strasbourg, and Windhoek, and led her along a colonial railroad in Namibia to the historic Tsumeb mine. This rich research became works that probe the ambivalence of that which shines: poems, intricate drawings, modular sculptures that form systems of display, and performances that are both gestural and dialogical.
With a foreword by Städelschule director Philippe Pirotte, Luster and Lucre also contains the essays “The Refusal of Shine” by curator Natasha Ginwala and “Blacklight” by scholar Denise Ferreira da Silva, as well as “Intricate Connections,” an interview between Otobong Nkanga, Clare Molloy, and Fabian Schöneich. The volume also contains three exhibition-pamphlet inserts.
Published following the artist's exhibitions at the 8th Berlin Biennale in 2014, Portikus, Frankfurt am Main; KADIST, Paris; and M HKA, Antwerp, in 2015.
A visual artist and performer, Nkanga (born 1974 in Kano, Nigeria, lives and works in Antwerp) began her art studies at the Obafemi Awolowo University in Ile-Ife, Nigeria and continued at the École Superieure des Beaux-Arts in Paris, France. She was at the residency program at the Rijksakademie van beeldende kunsten, Amsterdam, The Netherlands. In 2008 she obtained her Masters in the Performing Arts at Dasarts, Amsterdam, The Netherlands. Otobong Nkanga's drawings, installations, photographs and sculptures variously examine ideas around land and the value connected to natural resources In the work of Otobong Nkanga, activities and performance permeate all kinds of media and motivate photography, drawing, painting, sculpture, installation and video, though all the different works are thematically connected through architecture and landscape. As a human trace that testifies of ways of living and environmental issues, architecture and landscape act as a sounding board for narration and the performative? According to the artist herself, she uses her body and voice in live performances or in videos to become the protagonist in her work. However, her presence serves mostly as a self-effacing catalyst, an invisible hand that sets the artistic process in motion. Nkanga negotiates the completion of the cycle of art between the aesthetic realm of display and a strategy of de-sublimation that repeatedly pushes the status of the artwork into contingency. In many of her works Nkanga reflects metonymically on the use and cultural value connected to natural resources, exploring how meaning and function are relative within cultures, and revealing different roles and histories for the same products, particularly within the context of the artist's autobiography and memories.
order
Edited by Clare Molloy, Philippe Pirotte, Fabian Schöneich.
Texts by Denise Ferreira da Silva, Natasha Ginwala, Clare Molloy, Otobong Nkanga, Philippe Pirotte, Fabian Schöneich.