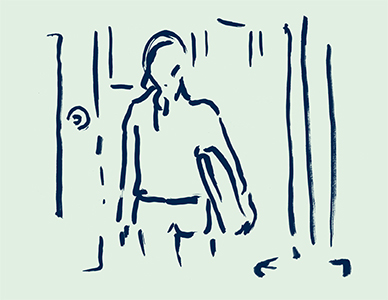 order
wishlist
Catalogue presenting a series of watercolours in which artist Sophie von Hellermann re-interprets artworks by Alex Israel, Sergej Jensen, Karen Kilimnik, Sarah Lucas, Marisa Merz, Kelley Walker, etc., all from the Cranford Collection.
To recollect Cranford Collection's installations at Gloucester Gate, we chose to ask an artist for their point of view. In 2015, young photographer Marie Angeletti gave a wild, almost sociological perspective on how life and art interacted within the house. To register the 2016 installation, we turned to Sophie von Hellermann, an artist whose work Cranford has collected extensively. Von Hellermann's work has always excelled at capturing the everyday while infusing it with psychological and magical overtones. Behind the artist's apparent ease, speed and painless approach lies an extraordinary sense of colour, composition and observation. There has always been a diarist in Sophie von Hellermann, and we thought this capacity to combine distance and intimacy would allow her to grasp how the artes interacts with the domestic space and rhythm of the Gloucester Gate house.
Von Hellermann came to the house regularly, armed with her watercolours and notepad. She chose specific perspectives and focuses to produce the watercolours which are assembled here. Most remarkable is the manner in which she has used domestic elements such as flowers, furniture and trinkets to trick our perception of space. The paintings and drawings hung on the walls seem to melt into the room, their structure dissolving into the surrounding space. She also used fast brushstrokes to incorporate movement, and thus time, into motionless spaces, exploring how art introduces life in the house even when it is empty of its inhabitants. A silent observer, removed from the action, she has created a fantasy where artworks and objects give each other life, taking over and disintegrating the structure that hosts them.
As other artists of her generation, Sophie von Hellermann (born 1978 in Munich, lives and works in New York) allows herself to draw from the history of painting and from its progressively acquired liberties in order to trace her singular path. From this singular space, she uses painting as an instrument that allows her simultaneously to appropriate and to excuse herself from reality. Each one of SvH's paintings condenses a story, and contains it perfectly within the limits of the frame, yet it is pierced full of holes from within. These empty spaces imbue her works with their evocative power : a capacity first to absorb the gaze and then to expose both the imagination and the memory to sensation. The subject-matter of her essentially narrative paintings is at the intersection of a personal and a collective history, without there being any clear boundaries between the two. Rapid execution, a prolific output, a casual style, narratives which blend history and the everyday, a permanent confusion between the trivial and the grandiose are the instruments she uses to transgress the rules of propriety in painting.
order wishlist
Edited by Sophie von Hellermann and Anne Pontégnie.
Text by Anne Pontégnie.