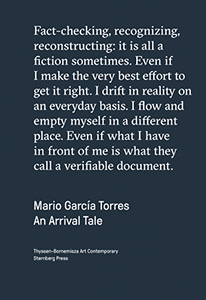 order
Mexican conceptual artist Mario García Torres examines the space of arrival as a complicated and disjointed nexus between departure, displacement, and return, in a series of works that reflect on the European migrant crisis.
Appropriation, storytelling, reenactment, and reportage are some of the strategies that Mario García Torres deploys to highlight the limitations of factual evidence and the agency of historical records and objects. An Arrival Tale detaches the Mexican artist's works in the TBA21 collection from their original contexts and offers them as a collection of narratives and artistic experiments open for reinscription in order to address the conditions and urgencies of our contemporary societies. It examines the space of arrival as a complicated and disjointed nexus between departure, displacement, and return.
This publication follows the eponymous exhibition at TBA21 – Augarten. While conceived in relation to the exhibition, this book is not a documentation, but rather the start of a journey that expands, explores, complicates, and undoes the thematic threads of spatial disjunction, recollection, asynchronicity, fictionality, and the politics of visibility.
Published following the eponymous exhibition at Thyssen-Bornemisza Art Contemporary – TBA 21 – Ausgarten, Vienna, from June 17 to November 20, 2016.
Mario García Torres (born 1975 in Monclova, Mexico, lives and works in Mexico City) received his MFA from the California Institute of the Arts in 2005. In his work he explores the potential of a diverse range of media including photography, film, performance in order for it to serve as a tool in his own re-examination of concerns related to history and conceptual art practice in which there is always a time or location displacement. In so doing, he derives a new idea from history and reality.
His solo exhibitions have included Museo Tamayo, Mexico City (2016), Modern Art Museum of Fort Worth (2015), Pérez Art Museum Miami (2014), Project Arts Centre, Dublin (2013), Museo Nacional Centro de Arte Reina Sofía, Madrid (2010), and Stedelijk Museum Amsterdam (2007). He has also participated in 8th Berlin Biennale (2014), dOCUMENTA(13), Kassel (2012), São Paulo Biennial (2010), Taipei Biennial (2010), Yokohama Triennale (2008), and Venice Biennale (2007). He is the winner of the 2007 Frieze Cartier Award for emerging international artists.