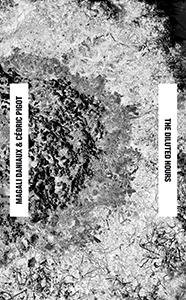 Transcript of incantations poems recorded on vinyl and produced in the framework of a multimedia work on sound and geology. The poem is translated into Inupiaq, the official Inuit language of the State of Alaska, where this project was developed.
The Diluted Hours is an artistic project by Magali Daniaux and Cédric Pigot that brings together multiple media (performance, poetry, photography, recorded sound, and video) to encode a unique biomaterial trace—in their words, an “archeological anomaly”—as both geological and musical record. The centerpiece of The Diluted Hours is a vinyl record with nearly 30 minutes of original music and spoken poetry, and which is pressed with the ashes of a batch of logs the duo shipped to Kotzebue, Alaska, and then burned.
Since they met in 2001, the joint work of Magali Daniaux & Cédric Pigot (born respectively in 1976 and 1966, live and work in Paris) bears the dual hallmark of experimentation and performance. Their pieces bring together various media, associating elements from opposite ranges, with a taste for connections between Sci-Fi and documentary forms, high-tech engineering and fantasy tales, heavyweight materials and fleeting sensations. Starting with installations and objects, their work soon included experimental actions and more immaterial artistic gestures. Videos, sound art, music, poetry, olfactive research, virtual works bordering the digital arts have formed, over the past years, a cycle of works dealing with climate change, economic, political and geo-strategic issues, urban development and food management.
The works of Magali Daniaux & Cédric Pigot were shown in leading institutions: Musée du Jeu de Paume in Paris in 2014, Venice Biennial of Architecture in Italy in 2014, Barents Spektakel in 2013 in Norway, Ultima Festival, at Oslo Opera in 2011, Palais de Tokyo in Paris in 2011, Qui Vive International Biennial in Moscow in 2010 and Dashanzi Art Festival in Beijing in 2004. We were laureates of a Villa Medici hors-les-murs residency in 2003, fellows at the Cité Siam in Bangkok in 2005, at Dar Batha in Fez, Morocco in 2013 and at Akademie Schloss Solitude, Germany in 2015 and 2016. We were finalists of the COAL Prize Art and Environment in 2010.