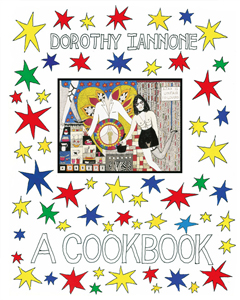 wishlist
The long-awaited facsimile publication of Dorothy Iannone's 1969 cookbook.
Since the 1960s, Dorothy Iannone has attempted to represent ecstatic love, “the union of gender, feeling, and pleasure.” Today her oeuvre, encompassing paintings, drawings, collages, videos, sculptures, objects, and artist's books, is widely recognized as one of the most provocative and fruitful bodies of work in recent decades in terms of the liberalization of female sexuality, and political and feminist issues. As Robert Filliou stated already in 1972, “She is a freedom fighter, and a forceful and dedicated artist, skillfully blending imagery and text, beauty and truth. Her aim is no less than human liberation.” A narrative element fed with personal mythologies, experiences, feelings, and relationships runs through all of her work, unified by her distinctive colorful, explicit, and comic book-like style.
Created in 1969, when she was living with Swiss artist Dieter Roth, the Cookbook is a perfect example of how she mixes daily life and an existential approach, culminating in her vision of cooking as an outlet for both eroticism and introspection. A real book of recipes full of visual delights, the Cookbook contains densely decorated pages with patterned designs, packed text, and vibrant colors. Personal sentences are interspersed among the lists of ingredients, revealing the exultations and tribulations of her life between the lines of recipes. Filled with wit and wordplay, associations between aliments and idiosyncratic thoughts—“At least one can turn pain to color” accompanies the recipe for gazpacho; “Dorothy's spirit is like this: green and yellow,” is written next to the ingredients for lentil soup—the Cookbook constitutes a mundane but essential self-portrait of the artist as a cook and a lover.
This publication is a facsimile of the 1969 original, now published with a dust jacket specially designed by the artist in 2017.
Since the early 1960s, Dorothy Iannone (born 1933 in Boston, lives and works in Berlin) has occupied herself with the attempt to represent ecstatic love: “the union of gender, feeling and pleasure,” as she herself describes it. Today, her oeuvre encompasses paintings, drawings, collages, video sculptures, objects, and publications. A narrative element, fed with personal mythologies, experiences, feelings, and relationships, runs through all of her works. Particularly in her late figurative painting, which almost appears to dissolve into the ornamental, she creates scenarios in symbolic settings, in which she also consistently celebrates a playful handling of the subject matter. Since the 1960s, this visual self-empowerment has been read as a contribution to the liberalization of female sexuality. On the other hand, Iannone, who takes a spiritual, existential approach, has never seen herself as part of a feminist movement. However, in bringing her works to the public, she inevitably manifests a self-understanding through her handling of controversial subject matter. 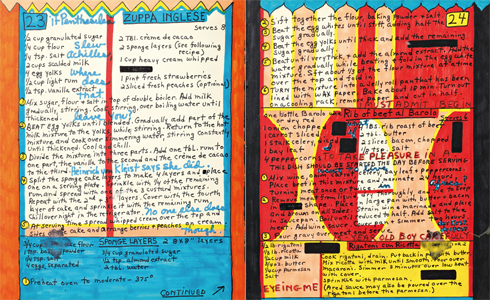