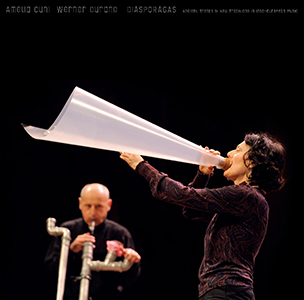 order
wishlist
An overview of the fruitful long-standing collaboration between Amelia Cuni, specialist of Indian dhrupad singing, and minimalist experimental musician Werner Durand.
Amelia Cuni was born in Milan and has lived in India for more than 10 years where she studied dhrupad singing with various renowned masters. Werner Durand has been performing his own music for saxophones, Iranian ney and self-made wind instruments since the late 70s. He started building his own wind instruments from plexi-glass, PVC and metal tubes in the early 80s and has performed in various groups including The Thirteenth Tribe and Armchair Traveller. For more than 20 years, Cuni and Durand have been performing together as a duo as well as in collaborations such as Tonaliens and Born Of Six.
Diasporagas, subtitled “Ancient Trends and New Traditions in Indo-European Music”, summarizes their various musical projects in which her Indian raga singing met with his minimalist and experimental approach. In all of their collaborations, they have been creating unique forms and expanding the palette of their sound worlds while keeping the essence of raga music, justifying the use of the term in its original meaning. The title is meant to be understood as a statement to provoke reflections on our ideas of cultural identity vs. globalization, and tradition vs. experimentation.
A central Diasporagas work is “Hiss (mastered noise)” for dhrupad singing, invented wind instruments, Indian percussion and samples of historical recordings by Indian singers. It is partly based on their earlier work “Gramophone Saraswati” which involved replicas of Luigi Russolo's Intonarumori instead of the Indian recordings. This LP includes “Hiss (mastered noise)” and two other pieces entitled “Aqua Shiva” and “Agana Song”. . Edition of 300 in a full-color sleeve with a printed inner sleeve reproducing the score of “Hiss (mastered noise)”.
Limited edition of 300 copies.
Amelia Cuni (born in Milan, lives and works in Berlin) is a singer, composer and performer. She has trained her voice and musical skills in India, according to the tradition of dhrupad singing and kathak dance, and is recognised internationally as one of the great contemporary proponents of traditional dhrupad singing. Her present work includes contemporary music and multimedia collaborations with several artists of international repute (she interpretated—with Werner Durand—the 18 Microtonal Ragas: Solo 58 by John Cage, a cycle of 18-scale patterns from the collection Song Books, 1970). She is engaged in the transmission of the knowledge she has acquired from her gurus and teaches Indian singing at the Vicenza Conservatory in Italy.
Coming from the minimalist tradition, Werner Durand is a German-born composer, instrument builder and performer. His music has evolved into a personal style over the years. Inspired by various kinds of traditional musics and instruments, he started to create his own music and instruments reflecting this. A variety of materials and playing techniques enables him to bring out unusual sounds and with the help of digital delays he can create rich textural and rhythmic pieces, which might recall tribal music from Africa or the Pacific, but at the same time sounding experimental or even (post-)industrial. Werner Durand has collaborated with numerous composers / performers including David Behrman, John Driscoll, Samm Bennett, Fast Forward, David Moss, Muslimgauze, Henning Christiansen, Dominique Regef, David Maranha, David Toop & Tom Recchion as well as with visual / sound artists Michaela Kölmel, Andreas Oldörp and Rolf Julius. He was a member of Arnold Dreyblatts Orchestra of Excited Strings from 1990-1997.