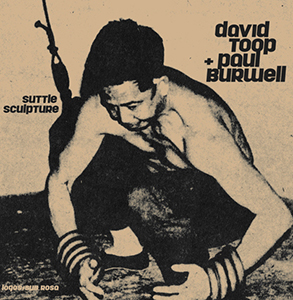 order
wishlist
Never released before recordings from Logos Foundation live sessions in Brussels, on May 7, 1977. Toop and Burwell's association, which ran during the seventies, was a good mixture of musical decomposition through free improvisation, bioacoustics, environmental sound, raw musics, anthropology, and .
“When Paul Burwell and I started playing together just after Christmas, 1969, we found ourselves wrestling with a new language of sound, listening, actions, objects and space. At first it was music. We studied in the improvisation classes given by John Stevens at Ealing College in 1971-2, also took classes in African music at London's Africa Centre.
Most of the musicians lasted only one or two sessions so we resigned ourselves to being a duo and worked out an approach to free improvisation that expanded from simple structures and instrument combinations. Decomposition, we called it.
We had worked intensively together, searching for techniques through which to decondition ourselves from orthodoxies, devising exercises in listening and instrument building, studying esoteric organology, bioacoustics, environmental sound, raw musics and anthropology. We were both fascinated by phenomena like diffraction, propulsion, resonance, projection, masking and heterodyning, and by shamanism, the symbolically grounded agency of shamanic drums, animal-becoming and noisy costume, the shaman's capacity to enliven quotidian space with the commotion of discarnate audible entities from the spirit world.
This recording is one of the very few that conveys anything of what we were about.”
David Toop
Born near London in 1949, David Toop is a musician, writer and sound curator. He has published three books, numerous solo albums since his first album released on Brian Eno's Obscure label in 1975, curated five CD compilations, composed the soundtrack for an outdoor spectacular under Lisbon Expo '98, recorded shamanistic ceremonies in Amazonas. He worked with musicians including Brian Eno, John Zorn, Prince Far I, Jon Hassell, Derek Bailey, Talvin Singh, Evan Parker, Max Eastley, Scanner, Ivor Cutler, Haruomi Hosono, Jin Hi Kim and Bill Laswell, and collaborated with artists from many other disciplines, including theatre director/actor Steven Berkoff, Japanese Butoh dancer Mitsutaka Ishii, sound poet Bob Cobbing, visual artist John Latham, filmmaker Jae-eun Choi and author Jeff Noon.
As a critic and columnist he has written for many publications, including The Wire, The Face, The Times, The Sunday Times, The Guardian, Arena, Vogue, Spin, GQ, Bookforum, Urb, Black Book, The New York Times and The Village Voice.
Paul Burwell (1949-2007) is a British percussionist and performance artist.
order wishlist
published in February 2018
black vinyl in brown carton sleeve
2 tracks (24'15 / 23'50)
16.50 €
in stock 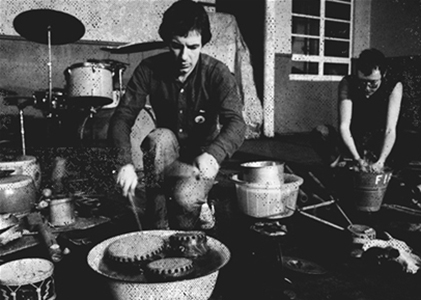