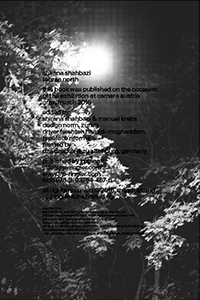 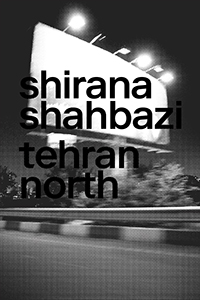 order
wishlist
Shirana Shahbazi's photo-project Tehran North is a subjective road movie captured from a car driving through the Iranian capital at night, offering a black and white kaleidoscopic vision of Tehran's urban landscape (artist's book).
Camera Austria publisher and director Reinhard Braun characterizes it as “a film noir traversing a megacity that, although remote and unknown to many, seems to be as common as others.” He continues: “Housing areas, illuminated shops and billboards, highways, facades vanish either in darkness either in bright light, slipping away from any decisive representation. Uncanny encounters clash with everyday banality. The mysterious is at the same time forced and undermined, suppressing any exoticism. Beauty is shaking knowledge, as fascination is shaking distant objectiveness, and vice versa. Both an inventory and a construction, highly artificial and generic, Tehran North ends with nearly unidentifiable shapes and almost slides into darkness. But this is not a statement of finishing; it is an introduction to all the other possible images to follow up.”
“Shahbazi's work cannot be pinned down to any specific visual context, genre, technique, or aesthetics. Her path from documentary to seemingly abstract images and studio photography nevertheless revolves around a coherent engagement with what might be called an equality of appearance. She demonstrates how it is possible to bridge apparent contradictions within ostensible disparate regimes of photography thanks to a montage that constellates photographs that might otherwise not be associated. Avoiding an understanding of photography driven by separating one image in contrast to the other she seems instead to constantly track one picture within another.”
Published on the occasion of the exhibition “Group Show” at Camera Austria, Graz, from March 12 to May 22, 2016.
Born 1974 in Tehran, Shirana Shahbazi moved to Germany when she was a child. Today she is based in Zurich. Trained as a photographer, Shahbazi shoots images – including portraits, still lifes and landscapes – and often uses them as source material not only for photographs but also for paintings, billboards or handmade carpets. By altering the scale and transposing the imagery into a new medium or a style associated with another culture, she subverts viewers' expectations and explores the complexity of identity.
Shirana Shahbazi's oeuvre reflects an ongoing interest in the relationship between images, their surfaces and their objecthood, as well as between the various artistic media and their apparent iconic qualities. Her pictures range from color-field abstractions to volatile holiday snapshots. The artist has assembled a population of images, which handles an equal weight as a dispersed as well as a coherent body of work. This showcases an impressive transitional quality, a mastery which Shirana Shahbazi hasn't yet grown tired to pursue. From heavy frames to delicate litho-prints, her projects talk in fragments about the artist's genuine engagement with issues of representation as well as the presentation of images themselves.
For her works she has received prestigious prizes, such as the Citigroup Private Bank Photography Prize (2002). She took part in the 50th Venice Biennale (2003) and has had exhibitions in notable museums e.g.: Museum of Modern Art, New York (2012/2013), Fotomuseum Winterthur (2011), New Museum, New York (2011), The Hammer Museum, UCLA, Los Angeles (2008), Museum Boijmans van Beuningen, Rotterdam (2008), Barbican Art Gallery, London (2007), Centre d'Art Contemporain, Genf (2005), Museum of Contemporary Photography, Chicago (2003).
Shirana Shahbazi is a member of the artists collective Shahrzad.
order wishlist
Edited by Manuel Krebs and Shirana Shahbazi. 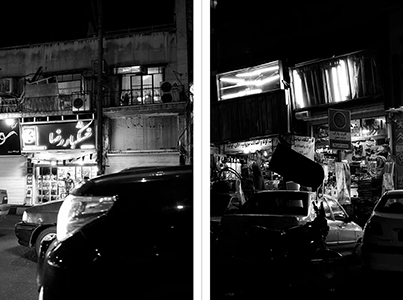 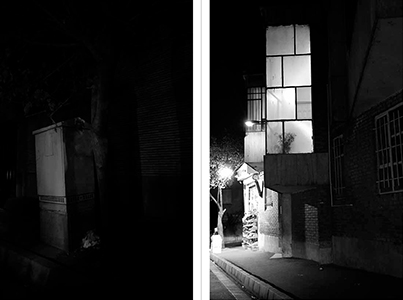 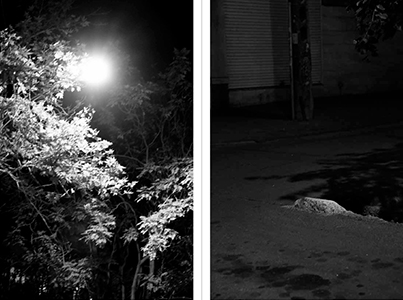