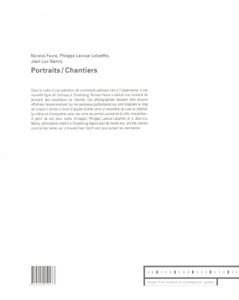 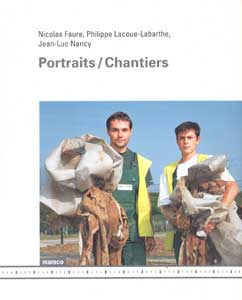 order
wishlist
Portraits of the workers on the tramway line in Strasbourg, with texts by Philippe Lacoue-Labarthe and Jean-Luc Nancy.
For the occasion of a public commission for the implantation of a new tramway line in Strasbourg, Nicolas Faure took hundreds of portraits of the workers on site. The enlarged images were temporarily posted on bill boards all along the line in addition to a series of views of the construction site. The project became a sort of portrait-document of the city at work. Two philosophers from Strasbourg, Philippe Lacoue-Labarthe and Jean-Luc Nancy, contributed texts to accompany the images.
Nicolas Faure (born 1949 in Geneva) apprenticed as a goldsmith in Geneva from 1968–1971 before traveling for several years to the Middle and Far East where he took his first photographs. Between 1975 and 1980 he lived in New York as a goldsmith and photographer. Faure was a teacher of photography at the University of Geneva, 1981–1983, and since 2001 at the Ecole Cantonale d'Art Lausanne ECAL. His work includes extensive photo series on Swiss highways 1994–1998, a collaboration with Time Life Books, and he publishes in magazines such as GEO, Actuel, and L'lllustré. Faure's fields of work include street photography, development of the Alpine landscape, design of public space, transportation infrastructure. He received federal grants in 1980, 1986, 1988; and the Kodak Prize in 1992.
order wishlist
Texts by Philippe Lacoue-Labarthe et Jean-Luc Nancy.
published in 2004
French edition
22,5 x 27 cm (softcover)
144 pages (114 colour ill.)
25.00 10.00 €
(special offer)
ISBN : 978-2-940159-27-7
EAN : 9782940159277
in stock