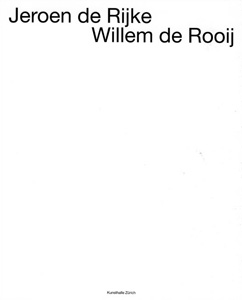 order
wishlist
Monograph.
This catalogue is published to accompany the exhibition de Rijke / de Rooij, Kunsthalle Zürich, 15.11.2003 - 11.1.2004.
Jeroen de Rijke (1970-2006) and Willem de Rooij (b. 1969) have worked together since 1994. Their work revolves around representation problems relating to artistic and media images, cultural-historical artefacts and socio-political forms. The two artists produce films and photographs, using the "beauty" of familiar compositional and formal principles and the tempting projection surface this provides for us. de Rijke/de Rooij's images are always disturbing because they usually concentrate on a single take, action or object; reduced image distillations intensify doubts over "the image", initiating a discourse about our culturally driven readings of phenomena, about how we use images and how they affect us.
De Rijke/de Rooij mingle images and composition principles from painting history, and also from cinema and video, with pictorial worlds from the commercial image industry, and formal-aesthetic elements of contemporary art. Their films are shot using professional film industry resources. They are not shown in the cinema, but exclusively in art venues. Here the artists insist on the best possible cinema setting, controlling the way their works are perceived down to the last pictorial, sound or installative detail. The exhibition space is treated like a sculpture, defined by the technical apparatus and the seating, a hybrid space somewhere between a cinema and an exhibition; it is present as a minimal sculpture, even when the film is not being shown. The artists also structure the audience's experience of time, choosing to avoid the endless loops generally used for exhibitions, with their associated arbitrary availability of the images / films for the public: performances take place at precisely stated times, or by request. But de Rijke/de Rooij are not interested in the cinema's traditional narrative forms: in fact they make the qualities of cinema and film available as moving image aggregates: experience of space and time, dialogues, sound, light, focus are "performers" in their own right and develop their own qualities in parallel. Often slowness is a key feature of their films. It reinforces something that is essential to an artist's work, which would not be possible without it: slowly revealing the ambivalence of an image, a scene, of something presented. So their films often start as an abstract or darkened image, which gradually turns out in the film's own time to be an object, a condition.
The hybrid manifestations of our present are central to the artists' content, transforming their abstract, beautiful works into socio-political pieces, as they convey culturally different identities and realities. As residents in a former colonial state, de Rijke / de Rooij experience the cultural adaptation phenomena and problems as powerful identity generators; as cosmopolitan citizens they experience them as a globalized theme for living together in an age of migration and hybridized cultural identity. Here de Rijke / de Rooij address what is one's "own" and what is "alien" as a refinement of the differences that demand more intensive attention to difference as such. Thus for example an early work called "Of Three Men" (1998) shows the interior of a neo-romanesque church in Amsterdam that is now used as a mosque. Picture details and camera angles are reminiscent of church interiors by the painter Pieter Saenredam. Elements of the action include changing light, a low-hanging chandelier circling slowly and rare movements by three men sitting on the floor. Or "Bantar Gebang" (2000): a single long-shot take in the transfigured pictorial manner of Pieter Breughel the Elder shows daybreak in a slum outside Jakarta; the image becomes increasingly dubious. The familiarity of the pictorial and compositional references - and the beauty of the compositions - are always over-determined in the artists' work and tip representation into critical presence: flowers, ideal love, the cinema, the central-perspective long shot, the numinous quality of a landscape/of nature, the representation of non-commensurate social realities come into conflict with the images of their representation.
order wishlist
Texts by David Bussel, Sven Lütticken, Jan Verwoert and Onno I.M. Ydena.