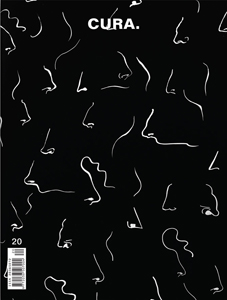 order
Projects, texts, visual essays and conversations with about twenty international artists, curators, critics and authors.
Many changes occurred to Cura. in the last months, with a series of new columns and contributors.
The new POP-UP SECTION, focusing on a MAIN TOPIC is cyclically investigated through the practice of leading international artists. The first series starts with Céline Condorelli in dialogue with Gavin Wade and James Langdon and leads us in the reasons of DISPLAY, a central topic for many artists who have been working with it and around it. The HOT! section highlights a new generation of emerging artists and introduces a few “hot” names of the contemporary scenario: Olga Balema (by Chris Sharp), Darja Bajagić (by Franklin Melendez), Sasha Braunig (by Rose Bouthillier) Rachel Rose (by Frances Loeffler). In the frame that investigates new generations of artists, Hans Ulrich Obrist focuses on the young artist Marguerite Humeau, whose research “is not limited to biological hybridization and its histories” but is also interested “in the ever-expanding forces of globalization and cultural homogenisation.”
Lisbon-based curatorial duo João Mourão and Luis Silva presents a new cycle of guided tours, where artists are invited to explain their work in the frame of the conceptual construction of a show and in function of the exhibition space. The first visit invites us to join the Museu Coleção Berardo in Lisbon, where Pedro Barateiro talks about his last exhibition, “The Current Situation / Palmeiras Bravas.”
If you have any question you ever wanted to ask to Ryan Gander, just ask Adam Carr if he can do it for you! In the framework of a choral conversation Adam collected questions from artists, curators, friends and now Ryan replies by talking about inspiration, laziness, authorship, music, colors, artist's expectations and much more.
Jenny Jaskey investigates Michael E. Smith's world, through a paradox that allocates artist's work on the side of the “super-velocity of contemporary art.” The artist “takes on technological immersion, but flips the perspective: his work reflects on the decaying, crusty remains of the human, whose evolutionary time-scale is moving at such a slow pace that its corporeal shell is quickly becoming viewed as obsolete technology.” “The power of the absurd is well understood by American artist Josh Kline” writes Ciara Moloney in her essay – the first to ever appear on a magazine on the artist's work – where the curator of his current exhibition at Modern Art Oxford investigates Kline's purposes, who through the use of advanced technologies makes a profound investigation into the contemporary globalized political and economic conditions.
In the political framework of future perspectives can be read also GCC's project A Wonderful World Under Construction. The collective, based in the Arabian Gulf, take their name from the English abbreviation for the Gulf Cooperation Council, a transnational, political and economic union. GCC engages in a multi-disciplinary practice that explores the construction of identities and systems across the purview of the contemporary Gulf society, including its bureaucratic, cultural and diplomatic arenas. Two more artistic projects drive us into a surreal scenario. The talented Villa Design Group, supported by curator Nicoletta Lambertucci, leads the reader into a theatrical performance, drawn through costumes and dialogues.
Meanwhile, artist Lena Henke and curator Anna Gritz invite the audience to interact with the magazine, by cutting pages and by recomposing them on the shape of New York City's poster, “a pulsating sweating, screwing mass of buildings, that is both stage and protagonist of the artist's work”.
From the future perspective of the mentioned artists we go toward a dystopian vision into the past, with the curatorial section that opens the magazine, as usual. Here Lorenzo Benedetti introduces us to the figure of Wim Beeren and his main exhibition projects, where the visionary curator had introduced the contemporary artistic researches of his time into an institutional context. While Jean-Max Colard, after having talked about exhibition-characters in the past issue, focuses now on poetry in the exhibition space: how poetry has been used in the visual disciplines entering in exhibition spaces, thanks to artists as John Giorno or Karl Holmqvist.
The cover of this issue was designed by the British artist Allison Katz and is introduced by a text by Ruba Katrib.
Cura.magazine is a platform for contemporary art based in Rome that investigates with an independent spirit today's artistic production, art's emerging scene and the borders that have marked its central moments, through collaborations with international artists and curators, who live in different areas of the world. It has a production of three issues per year.
The platform is also an editorial structure (Cura.books), publishing a series of artist's books (see the corresponding page in the publishers section).
order
published in October 2015
English edition
20,5 x 28,5 cm (softcover)
160 pages (color ill.)
7.00 €
in stock