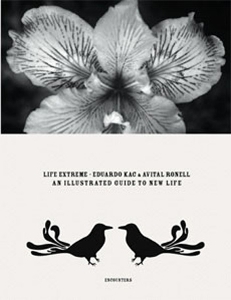 order
wishlist
At the junction of art and science, Life Extreme intends to present new living beings created by man, beings no longer produced solely by ‚Äúnature‚Äù. This poetic proposition takes the form of a guide to new lives among the most astonishing that have appeared at the beginning of the Twenty-first century.
Artist Eduardo Kac, a pioneer of bio-art, and Avital Ronell exchanges on very controversial questions inspired by scientific actuality in the biotechnological field, challenging the limits of what's human, its boundaries, its possibilities and questioning the fundamental distinction between the natural and artificial, nature and technology, and the human and the machine. Kac and Ronell are both concerned with the emergence of new cultural practices. In Life Extreme they collaborate at the intersection of a natural history of creatures made by humans, the living evolution and private life of creatures real but rarely seen. While the oldest living indexed in Life Extreme dates back to the Seventeenth century, many others were created in the Twenty-first century. Gathered here for the first time, these plants and unique animals narrate a different history of life on planet Earth. This world, at the limit of reality and the imaginary, is a world on the verge of existence, a fantastic world that tells us more about our reality than reality itself. Once more, what appears in front of us under the mystical mask of pure science and objective knowledge on nature reveals itself to be a political, economic and social ideology. ‚ÄúFor me, Kac explains, it's a question of moving the private space of the laboratory right into the center of the social space by transforming the object into the subject.‚Äù
Eduardo Kac (born 1962 in Rio de Janeiro) is internationally recognized for his telepresence and bio art. A pioneer of telecommunications art in the pre-Web' 1980s, Eduardo Kacemerged in the early 1990s with his radical works combining telerobotics and living organisms. His visionary integration of robotics, biology and networking explores the fluidity of subject positions in the post-digital world. His work deals with issues that range from the mythopoetics of online experience to the cultural impact of biotechnology; from the changing condition of memory in the digital age to distributed collective agency; from the problematic notion of the ‚Äúexotic‚Äù to the creation of life and evolution. At the dawn of the twenty-first century Kac opened a new direction for contemporary art with his ‚Äútransgenic art‚Äù.
Avital Ronell (born 1952 in Prague) is an influential American philosopher and Professor of Comparative literature at New York University, close to French Theory.
order wishlist
published in November 2007
English edition
16,5 x 21,5 cm (softcover)
128 pages (70 color ill.)
29.00 ‚Ç¨
ISBN : 978-2-914563-34-5
EAN : 9782914563345
in stock 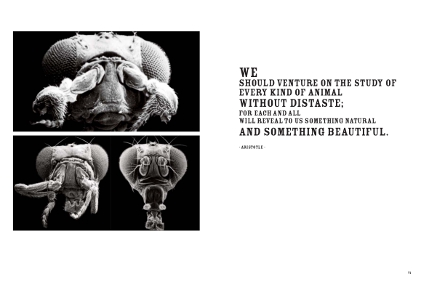 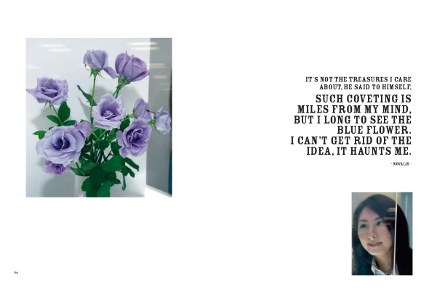