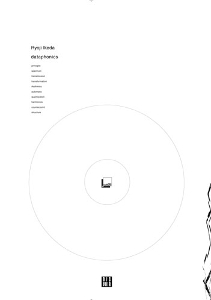 wishlist
Conceived as an homage to Musique Concrète pioneer Pierre Schaeffer's Solfège de l'objet sonore, Dataphonics is a project that focuses on the relationship between the data of sound and the sound of data. The work deploys frequencies at the very edges of human hearing, sounds that, as Ryoji Ikeda explains, “the listener becomes aware of only upon their disappearance.”
Dataphonics began as a monthly broadcast on French radio. It is a highly physical auditory response to the ever–present binary numerical system of today's digital age, ultimately seeking to materialize the invisible domain of “totally-pure-digital-data”. This book and audio CD includes the mathematical and graphical examinations of the fundamental binary reduction/representation of sound waveforms, and 10 audio tracks composed from non-audio data as their elemental materials.
This book is still available in French edition (same content, with only the dust jacket in French).
Japan's leading electronic composer and sound artist Ryoji Ikeda (born 1966 in Gifu, Japan, lives and works in Paris) focuses on the minutiae of ultrasonics, frequencies and the essential characteristics of sound itself. His work exploits sound's physical property, its causality with human perception and relationship with mathematics. Using computer and digital technology to the utmost limit, Ikeda has been developing particular “microscopic” methods for sound engineering and composition. Since 1995 he has been intensely active in sound art through concerts, installations and recordings: the albums +/- (1996), 0 degrees (1998) and Matrix (2000) have been hailed by critics as the most radical and innovative examples of contemporary electronic music. The versatile range of his research is also demonstrated by the collaborations with choreographer William Forsythe & Frankfurt Ballett and artist-musician Carsten Nicolai, among others. Ryoji Ikeda received the Golden Nica prize at Ars Electronica 2001 in the Digital Music category.
wishlist
published in April 2010
English edition
16,5 x 21,5 cm (softcover)
64 pages (62 b/w ill.)
29.00 €
ISBN : 978-2-914563-51-2
EAN : 9782914563512
currently out of stock