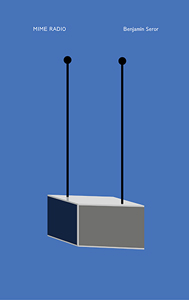 order
wishlist
A novel written orally by the artist Benjamin Seror.
Mime Radio was performed and written orally by French artist Benjamin Seror at a series of events over a two-year period, then transcribed and edited into a novel. The story revolves around a cast of eccentric characters, who meet at the Tiki Coco, a bar in Los Angeles that holds “Challenging Reality Open Mic” nights for amateur inventors and performers. Eventually, the protagonists get caught up in trying to help Marsyas, a character from ancient Greek mythology that lost his body after being defeated in a music contest against the god Apollo, to recover his voice, his very ancient voice. Unbeknownst to them, this recovery unleashes a disaster... Mime Radio is a novel about how language and perception can be one and the same.
Mime Radio was recorded on a Tascam DR 40, and transcribed by Clare Noonan.
Born 1979 in Lyon, Benjamin Seror lives and works in Brussels.
order wishlist
Edited by
published in May 2015
English edition
14 x 22 cm (hardcover)
136 pages
20.00 €
ISBN : 978-3-95679-151-2
EAN : 9783956791512
in stock
press releases
Critique d'art, Alexandre Castant, 2015 (PDF)