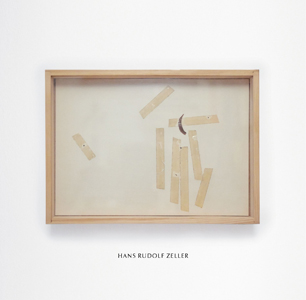 order
wishlist
This LP edition is an attempt at collecting various elements of Hans Rudolf Zeller's work. All recordings have been made within the last 10 years, yet many of the underlying concepts date back to the 1960s or 1970s.
Contained are two scriptophonies (works combining writing and vocals, with the notion of writing being extended in ways not unlike those Carlfriedrich Claus and Gerhard Rühm have shown), two vocal improvisations, one piece of Tesa sounds (sounds produced by adhesive tape), and one piece for horn. The full-color sleeve and inner sleeve show Tesa pictures made between 1961 and 1970, and one collage from 2010. There is one insert with detailed liner notes by Zeller in German and English, and another insert showing a relic of a scriptophony.
Edition of 300.
Hans Rudolf Zeller (born 1934 in Berlin) is best-known for being a music theorist, essayist and writer on contemporary music. His essays on Dieter Schnebel, Iannis Xenakis, microtonality etc., often published in the German journal “Musik-Konzepte”, are deemed being among the best ever written on new music. Apart from that, he has since the 1960s maintained his own artistic work, most of which has not been published or only seen the light of day in private micro-editions. Zeller's work often involves combining multiple dimensions (texts, vocals, visual projections) into one cinematological literature.
order wishlist
published in December 2014
24.00 17.00 €
(special offer)
in stock