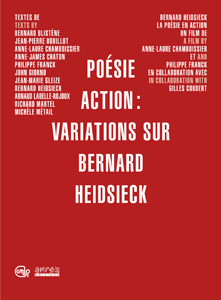 order
Box set including a book and a film on DVD.
Bernard Heidsieck, a poet in action.
Or poetry in action.
Or a collection of works by Bernard Heidsieck selected from the Centre national des art plastiques collections and presented by Anne-Laure Chamboissier and Philippe Franck at the Sonopoetics exhibition in Brussels, in 2010.
Or a desire to meet a pioneering artist and explore his unique corpus.
Or testimonials from a circle of artists.
Or a film to affirm the importance and currency of this major corpus.
Or an anthology of original contributions from Bernard Blistène, Jean-Pierre Bobillot, Anne-Laure Chamboissier, Anne-James Chaton, Philippe Franck, John Giorno, Jean-Marie Gleize, Bernard Heidsieck, Arnaud Labelle-Rojoux, Richard Martel and Michèle Métail.

This documentary film directed by Anne-Laure Chamboissier and Philippe Franck, in collaboration with Gilles Coudert, brushes an intimate portrait of Bernard Heidsieck, pioneer in the sound poetry movement since 1955 and founder in 1962 of action poetry. The film takes viewers into Heidsieck's “double life” as an artist and a banker, exploring his work through a series of conversations and seldom-seen audiovisual archives. Interviews with other major figures from sound poetry add to viewers' understanding. Jean-Pierre Bobillot, Olivier Cadiot, Laurent Cauwet, Anne-James Chaton, Paul-Armand Gette, John Giorno, Bernard Heidsieck, Françoise Janicot, Arnaud Labelle-Rojoux and Jean-Jacques Lebel paint a very lively picture of the history of sound poetry and the current developments.
Anne-Laure Chamboissier curates contemporary art exhibitions.
Philippe Franck is an art historian, concept creator and cultural critic, producer, teacher and interdisciplinary artist.
Gilles Coudert is a filmmaker, producer and publisher.
Bernard Heidseick (1928-2014) decided in the mid-1950s to break off from written poetry, and to bring it outside of books. He opposed passive poetry to active poetry, to an “on its feet” poetry, in his own words. Starting in 1955 he was one of the founders of Sound Poetry, and in 1962 of Action Poetry. As early as 1959 he used a tape recorder as an additional means for writing and retransmitting, opening his research to new experimental fields.
While remaining concerned with semantics, Bernard Heidseick became inc is reasingly independent from the constraints of language. He explored all its formal aspects, either by spatializing the text in his written scores, or by the presence of his body in space. He gave sound a formal dimension, notably through an exceptional diction based as much on breathing as on articulating perfectly or on constantly renewing the inflections of his voice.
As the years went by he reinvented his writing in order to render our daily life more accurately. Our social, political or economical universe, through its main events, as well as through its extreme ordinariness. In 1955 he developed his first Score-Poems. He then worked continuously on series, with the 13 Biopsies between 1966 and 1969. From 1969 to 1980, he created the 29 Passe-Partout (Catch-alls). From 1978 to 1986, he wrote Derviche/Le Robert (Dervish/Le Robert) composed of 26 sound poems. Then, beginning in 1988, Respirations et brèves rencontres ( Respiration and Brief Encounters) (60 poems created from the archives of recordings of artists' breathing).
At the same time he organized in 1976 in Paris at the Annick Le Moine Studio the first International Festival of Sound Poetry, and along with Michèle Métail, the International Festival of Sound Poetry in Rennes, at Le Havre and in Paris at the Centre Georges Pompidou. For many years he helped organize the Polyphonix Festival, which he presided for a while. He has organized over 540 public readings of his texts in twenty different countries.
order
Edited by Gilles Coudert et Bénédicte Godin.
Texts by Bernard Blistène, Jean-Pierre Bobillot, Anne-Laure Chamboissier, Anne-James Chaton, Philippe Franck, John Giorno, Jean-Marie Gleize, Bernard Heidsieck, Arnaud Labelle-Rojoux, Richard Martel, Michèle Métail.
Film directed by Anne-Laure-Chamboissier and Philippe Franck, in collaboration with Gilles Coudert.
published in January 2015
bilingual edition (English / French), original version, English / French subtitles
14 x 19 cm (softcover)
124 pages (b/w ill.), video DVD 56'
20.00 €
ISBN : 979-10-91490-16-0
EAN : 9791091490160
in stock
view video sample
http://www.lespressesdureel.com/VIDEO/apres/3655.mp4