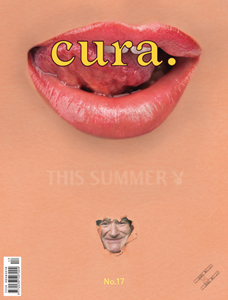 order
Essays and conversations about the practice of exhibition making; conversations, texts, labs, projects and contributions by about twenty international artists, curators and critics.
Cura. No.17 comes with the great cover by Andrew Norman Wilson introduced with a letter by Alex Ross.
The first section about curatorial practice starts as always with an essay by Lorenzo Benedetti engaged to go ahead with his series on extraordinary figures of the past, talking about Walter Zanini, the visionary director of MAC USP and curator of São Paulo Biennials, a role he held on 1981 and 1983 during a dramatic period of democratic and cultural crisis his country was going through. Vincent Honoré is in conversation with Margarida Mendes, founder director of The Barber Shop, a singular space with a reckless artistic program based in Lisbon, while Jean-Max Colard concludes his long essay about preface to the exhibition, started in the previous issue, by ending it with the exhibition-preface.
The second part of the issue, devoted to the artistic practice of the emerging scene and the projects on paper, starts with a provocative dialogue between Ed Fornieles and the curator Ben Vickers; if you want to get the artist's personal contacts, just read it! Then we are in Lisbon again with João Mourão and Luís Silva, directors of the Kunsthalle Lissabon who discuss with Patrizio Di Massimo their recent show together and the artist's practice. The curator Matthew de Pulford introduces us to the production of the British artist Jack Lavender, inhabited by found objects, funny plastic donuts and sausages, instead of Adam Carr, who presents a special project by the Danish artist Rolf Nowotny, that uses this space to compound his recent thoughts about the way in which the past can revive in the present. Cecilia Canziani goes ahead with her ping pong of texts and images involving the established artist Judith Hopf and a selection of her series of masks. At the same time the young curator Frances Loeffler writes in a detailed way a brief essay about the practice of the American artist Avery Singer and her wonderful paintings. The issue also includes other projects by Marie Angeletti who involved both the poet Quinn Latimer and the curator Anne Dressen and a wonderful exhibition especially set up by the collective group of Brooklyn-based artists The Still House Group at the East Broadway Mall.
Cura.magazine is a platform for contemporary art based in Rome that investigates with an independent spirit today's artistic production, art's emerging scene and the borders that have marked its central moments, through collaborations with international artists and curators, who live in different areas of the world. It has a production of three issues per year.
The platform is also an editorial structure (Cura.books), publishing a series of artist's books (see the corresponding page in the publishers section).
order
published in July 2014
English edition
20,5 x 28,5 cm (softcover)
160 pages (color ill.)
7.00 €
in stock
table of contents