The Garden is full of Metal – Homage to Derek Jarman (CD) 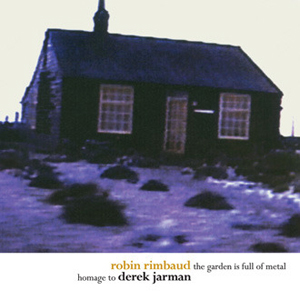 order
wishlist
A tribute to film director Derek Jarman (reissue of the second full-length album by Robin Rimbaud / Scanner on Sub Rosa in 1997).
Robin Rimbaud was both a friend and collaborator over the years and this CD is his tribute to an important figure in both his life and others'. Using recordings of Jarman's voice as well as location recordings around his home, he creates a graceful and delicate sculpture in sound. This is a close friend's tribute, backed by a profound understanding of the filmmaker's sense of intimacy, atmosphere and drama.
This album is a collection of memories taking recordings from spaces that Jarman inhabited or experienced—from the walk to the sea's edge from his cottage in Dungeness through to the roar of London congestion around his Charing Cross flat—Robin Rimbaud has attempted to create a fluid, elegiac sound portrait, a form of resonant landscape painting that weaves through recordings of Jarman's own voice. Robin Rimbaud applied the term 'sound polaroids' to describe these intimate, isolated, improvised moments, the same way a polaroid camera captures an image for a moment, almost dispoable, forgotten, a tiny epiphany that dwells within but surfaces at unexpetcetd triggers.
The majority of the sound here is abstracted and processed through modest means, cutting, stretching and editing tape—acoustic data like this once digitised dissolves into a form that one can mould and re-shape in an almost scultural manner.
On the 20th anniversary of the passing of Derek Jarman and this 2014 reissue Robin Rimbaud reviewed many of the materials in his archive and discovered four selections that were originally off the release but feel now that they offer another viewing.

“This is a creative mind and man I still miss, but who thankfully and finally seems to be receiving the accolation he should have received long ago.” (Robin Rimbaud)

“A beautiful and fragile tapestry. Reflective, tactile and emotional.” The Wire

“This music operates a certain unsettling, eerie magic on the listener, sneaking out of the speakers surreptitiously and filling the room like a sudden burst of sunlight. Even those unaware of Jarman's flicks will be moved.” NME
2014 version: new design, remastered + unreleased tracks.

See also Simon Fisher Turner: Derek Jarman Super8 – Soundtracks For Derek (3 CD).
British artist Robin Rimbaud aka Scanner (born 1964 in Southfields, London) traverses the experimental terrain between sound, space, image and form, creating absorbing, multi-layered sound pieces that twist technology in unconventional ways. From his early controversial work using found mobile phone conversations, through to his focus on trawling the hidden noise of the modern metropolis as the symbol of the place where hidden meanings and missed contacts emerge, his restless explorations have won him international admiration from amongst others, Bjork, Aphex Twin and Stockhausen.
Since 1991 he has been intensely active in sonic art, producing concerts, installations and recordings, the albums Mass Observation (1994), Delivery (1997), and The Garden is Full of Metal (1998) hailed by critics as innovative and inspirational works of contemporary electronic music.
Committed to working with cutting edge practitioners he has collaborated with Bryan Ferry, Wayne McGregor, Mike Kelley, Carsten Nicolai, Michael Nyman, Steve McQueen, Laurie Anderson and Hussein Chalayan, amongst many others.
His work connects the points between a bewilderingly diverse array of genres—a partial list would include sound design, film scores, computer music, digital avant garde, contemporary composition, large-scale multimedia performances, product design, architecture, fashion design, rock music and jazz.
order wishlist
published in April 2014
6 pages digipack
13.00 €
in stock
table of contents

The Garden is full of Metal

The Garden is full of Metal