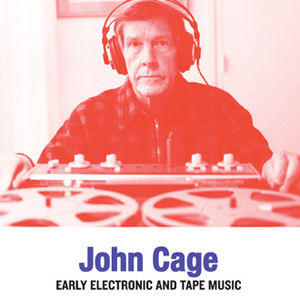 order
wishlist
Historically important pieces documenting John Cage's early electronic and tape practice.
Although John Cage occasionally worked in large, sophisticated studios—for example, when he composed Fontana Mix in 1958—his approach to electronic and tape music was often uncomplicated, makeshift, and pragmatic, employing simple tabletop devices: tape machines, phonograph cartridges, contact microphones, record players, portable radios, etc.
He developed a soundworld that was utterly new, radical and demanding. It heralded the age of the loudspeaker, mass communication and Marshall McLuhan's “global village.” The hiss, crackle and hum of electronic circuits, and the disembodied sounds, snatched by radio from the ether, spoke of the 20th century.
Langham Research Centre works within the tradition firmly established by Cage, using resources that would have been available to him. For the realisation of Cartridge Music, moving iron phonograph pickups were sourced and restored. These have a knurled screw designed to hold a steel phonograph needle and, in the piece, other objects are inserted and amplified: pieces of wire, toothpicks, paperclips, etc. The realisation of Fontana Mix includes the individual mono tracks from Cage's original tapes created in 1958. These are played using open-reel tape machines. These practices ensure we work within the limitations that Cage experienced and enable us to get close to the soundworld he inhabited. (Robert Worby, LRC)

Also available on vinyl LP.
American composer John Cage (1912-1992) is a leading actor of the twentieth century musical avant-garde. His work has been a major influence on the fields of experimental music and contemporary art.

Langham Research Centre (Felix Carey, Iain Chambers, Philip Tagney, Robert Worby) is a group devoted to authentic performances of classic electronic music, and the creation of new music from their instrumentarium of vintage analogue devices.
Langham Research Centre came together in 2003 with the purpose of using a studio as their instrument: a studio with microphones and also, crucially, several ¼" tape machines. From the start they were interested in manipulating sound on tape and in focusing on one sound source, or a small number of sounds. Their inspiration and enthusiasm are driven by the soundworlds produced by maverick composers working in the middle of the 20th century. Like an early music group's use of historic instruments, LRC continue to work with obsolete equipment including tape recorders, gramophone cartridges and sine wave oscillators, to perform authentic versions of 20th century classic electronic repertoire by John Cage, Alvin Lucier and others.
order wishlist
Performed by the Langham Research Centre.
published in April 2014
14.00 €
in stock
table of contents