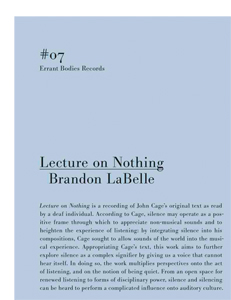 order
wishlist
A recording of John Cage's original text as read by a deaf individual (audio CD with booklet).
Lecture on Nothing is a recording of John Cage's original text as read by a deaf individual. According to Cage, silence may operate as a positive frame through which to appreciate non-musical sounds and to heighten the experience of listening: by integrating silence into his compositions, Cage sought to allow sounds of the world into the musical experience. Appropriating Cage's text, this work aims to further explore silence as a complex signifier by giving us a voice that cannot hear itself. In doing so, the work multiplies perspectives onto the act of listening, and on the notion of being quiet. From an open space for renewed listening to forms of disciplinary power, silence and silencing can be heard to perform a complicated influence onto auditory culture.
Lecture recorded in Los Angeles, 2010.
Brandon LaBelle is a musician, artist, writer, theorist, curator, educator and editor based in Berlin. His work, based on performance, sound installation, recording and use of found sounds, focuses on questions of agency, community, pirate culture, and poetics, which results in a range of collaborative and para-institutional initiatives, including: The Listening Biennial and Academy (2021-), Communities in Movement (2019-), The Living School (2014-16), Oficina de Autonomia (2017), The Imaginary Republic (2014-19), Dirty Ear Forum (2013-), Surface Tension (2003-2008), and Surface Tension (1998-2002). LaBelle reflects fluently on his artistic practice, drawing attention to the social dimensions of listening and manner in which sounds, in multiple variations, play upon public spaces, and drawing connections across media and incorporate video, as well as architectural and sculptural vocabularies into an expanded field that embraces rhetorical and spatial challenges.
In 1995 he founded Errant Bodies Press, an independent publishing house supporting work in sound art and studies, performance and poetics, artistic research and contemporary political thought.
order wishlist
Reading by David Kurs.
published in April 2011
13,5 x 18,2 cm (Digipack, inserted booklet)
54'
15.00 €
in stock