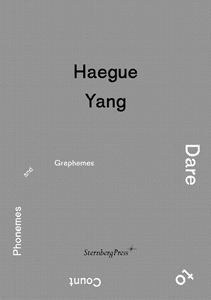 order
wishlist
A new collaborative publication, that has evolved within the framework of two geographically separate yet collaboratively conceived exhibitions.
This catalogue accompanies two parallel solo exhibitions by Haegue Yang held in the fall of 2013: “Journal of Bouba/kiki” at Glasgow Sculpture Studios (October 5–December 20, 2013); and “Journal of Echomimetic Motions” at Bergen Kunsthall (October 18–December 22, 2013). This new collaborative publication, Dare to Count Phonemes and Graphemes, has evolved within the framework of these geographically separate yet collaboratively conceived exhibitions. While each exhibition was an independent manifestation, they both are intrinsically linked to Yang's continuous artistic evolution. The developments shown are emblematic of the artist's recent projects, focusing on the ideas of abstraction and motion. This catalogue presents two newly commissioned texts, as well as an interview between Yang and the respective curators of the exhibitions, which explore the artist's distinctive and diverse work.
Haegue Yang's works are internationally appreciated and are well known for an eloquent and seductive language of visual abstraction that she often combines with direct sensory experience. She is an artist who continuously pushes the boundaries of her practice, engaging with new methodologies and ways of making. This approach is evident from her exhibitions at Glasgow Sculpture Studios and Bergen Kunsthall as well as this new publication.
Haegue Yang (born 1971 in Seoul, lives and works in Berlin and Seoul) is one of the most influential Korean artists of her generation. Using several media, from collage to performance, she explores the sensual and formal properties of everyday objects and materials (venetian blinds, fans, infrared detection devices, etc.), taken out of their original context and rearranged into abstract compositions, investing them with a new, poetic meaning with political or emotional overtones. Her often abstract constructions are in fact sensory experiences whose crux is an implicit critique of the modern.
Haegue Yang represented South Korea at the 2009 Venice Biennale. She has also shown at Documenta (Kassel), the Walker Art Center (Minneapolis), the ICA (Boston), the Samsung Museum of Art (Seoul), the 13th Lyon Biennale...
Haegue Yang has been awarded the 2018 Wolfgang Hahn Prize.
order wishlist
Texts by Ute Meta Bauer, Kathy Noble; Haegue Yang interviewed by Kyla McDonald and Steinar Sekkingstad.