Shopping in Jail – Ideas, Essays, and Stories for the Increasingly Real Twenty-First Century 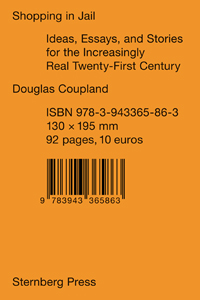 order
wishlist
A collection of essays on art and culture.
In Douglas Coupland's writing, the doldrums of a world afflicted by the pains of dotcom booms and busts, the ascendency of subcultures to pop cultures, and the subsequent struggle for identity are counterbalanced by droll, personal, and incisive analyses. This collection of nonfiction essays provides an illuminating meander through what we call culture today.
Douglas Coupland (born 1961 in Baden Söllingen, Gemrany) is a Canadian writer, visual artist, and designer. His first novel, Generation X, was an international bestseller. He has published fourteen novels, two collections of short stories, and seven nonfiction books; written and performed for the Royal Shakespeare Company; and has penned a number of works for film and television. He is a regular contributor to the New York Times, Wired magazine, and the Financial Times.
order wishlist
Introduction by Shumon Basar.
published in September 2013
English edition
13 x 19,5 cm (softcover)
92 pages
10.00 €
ISBN : 978-3-943365-86-3
EAN : 9783943365863
in stock