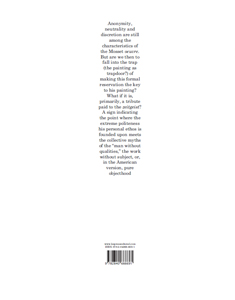 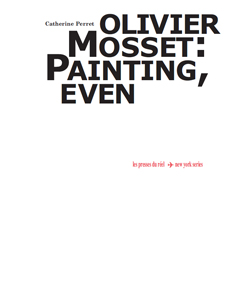 order
wishlist
A study of the work of Olivier Mosset in 46 chapters.
Anonymity, neutrality and discretion are still among the characteristics of the Mosset œuvre. But are we then to fall into the trap (the painting as trapdoor?) of making this formal reservation the key to his painting? What if it is, primarily, a tribute paid to the zeitgeist? A sign indicating the point where the extreme politeness his personal ethos is founded upon meets the collective myths of the “man without qualities,” the work without subject, or, in the American version, pure objecthood.
The book is part of the New York series, created conjunctively by Les presses du réel and the French Cultural Services in New York to publish theoretical texts in English not only on contemporary art but also on dance, and on emerging American performance that is more in line with French thinking. The series is inspired by a simple assumption: that contemporary culture is a public good that offers perspective on the questions of our time. Today, contemporary art is increasingly merchandised and yet undervalued in its capacity to give new perspective on the globalized world in which we live. Keeping up with international debates, this series attempts to support that budding perspective.

Olivier Mosset (born 1944 in Berne, lives and works in Tucson) worked in Paris from 1965 to 1977, participated in the creation of the group BMTP and then went to live in New York. He did numerous exhibitions with the Radical American Painters in the 1980s.
Mosset describes himself as a painter rather than an artist. His work is based on a principle of neutrality, radicality and self-effacement that constantly challenge the limits of painting. His approach involves continually going back to previous explorations and diversifying them, taking care to integrate into his conceptions the conditions in which they appeared, to modify his work in line with the current cultural context, thus questioning painting in its initial materiality.
Catherine Perret (born 1956 in Paris) is associate professor of modern and contemporary aesthetics and theory at Nanterre University (Paris X). She was the director of the Art of Exhibition Department at Paris X. She served as a program director at the Collège International de Philosophie from 1995 to 2001. She is currently responsible for the Centre de recherche sur l'art, philosophie, esthétique (CRéART - PHI) at Paris X.
order wishlist
Translated from the French (original title: Olivier Mosset – La Peinture, même, Ides et Calendes, 2004).
published in November 2013
English edition
16,5 x 21 cm (softcover)
112 pages (1 b/w ill.)
15.00 €
ISBN : 978-2-84066-669-1
EAN : 9782840666691
in stock
download an excerpt in PDF:
p. 7-12 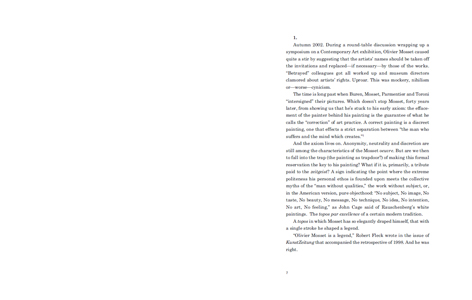 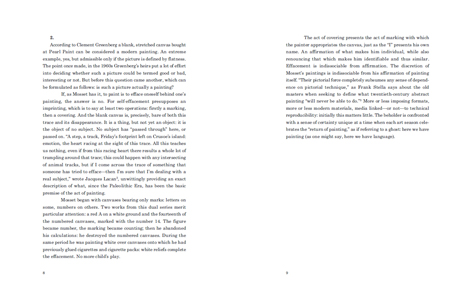 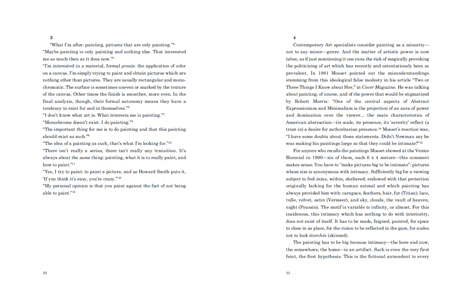