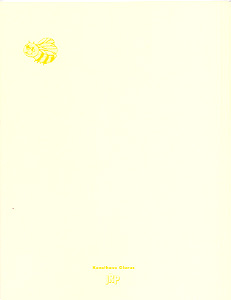 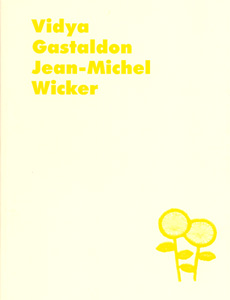 order
wishlist
The first monograph dedicated to the collaboration between two artists.
"Think positively, absolutely. I know it's hard, but it's possible. The works of Jean-Michel Wicker and Vidya Gastaldon are proof that it is possible. Their woolen pompoms, beads and string, organic forms arranged like coral, like blobs underwater or in space, all attest to positive qualities. Their objects appear to be filled with joy."
Jan Verwoert
Initially associated with Jean-Michel Wicker, over the years Vidya Gastaldon (norn 1974 in Besançon, france, now lives and works in Geneva) has developed a universe immersed in a hippie and psychedelic aesthetic, in New Age, and in minimalist abstraction, as well as devalued practices such as sewing or DIY.
Through her series of drawings, her films, and her sculptures in wool and other “craft” materials, the artist deploys an aesthetic of "states" rather than of formal or theoretical references, where notions of pleasure and experience find a new force.
Since the 1990s, the work of French artist Jean-Michel Wicker (born 1970 in Riedisheim, lives and works in Berlin) hhas focused on all forms of production, including publishing, typography, performance, and gardening. Wicker is the founder of the publishing houses Le edizioni della luna, Nice, Le edizioni della china, Berlin, and Ballabella papers, Berlin. His recent solo exhibitions include Edouard Montassut, Paris (2017), Bergen Kunsthall (2015), Sandy Brown, Berlin (2015), Künstlerhaus, Stuttgart (2015), Cubitt, London (2014), New Theater, Berlin (2014), Artists Space, New York (2013), Kunsthalle Bern (2012), and KW Institute for Contemporary Art, Berlin (2010). He has also exhibited in group shows, including the Institute of Contemporary Arts, London (2014), Kunsthal Charlottenborg, Copenhagen (2011), and Kunsthalle Zürich (2011).
order wishlist
Text by Jan Verwoert.