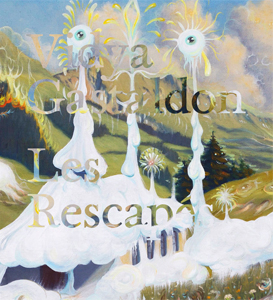 order
wishlist
New monograph.
Through her drawings, paintings and fabric installations, the Franco-Swiss artist Vidya Gastaldon nurtures a protean aesthetic, both humble and psychedelic, claiming a form of simplicity and economy of means. Her recent series of oil paintings (Healing Painting, 2013-) is the best illustration of her approach. An assiduous visitor of Emmaus and Caritas charity centers, she recovers, adopts and repaints forgotten canvases of Sunday painters, bringing new life to them and reintroducing them into the circuit of a possible perspective. Between ecological thinking and esotericism (reincarnation, transmigration of souls), Vidya Gastaldon juggles with a plurality of spiritual and artistic references - borrowing from art history as well as from pop culture, Hindu deities and Biblical stories - always with much distance and an undeniable sense of humor.
Published on the occasion of the eponymous exhibition at the musée de l'Abbaye Sainte-Croix - MASC, Les Sables d'Olonne, from June 19 to September 25, 2016
Initially associated with Jean-Michel Wicker, over the years Vidya Gastaldon (norn 1974 in Besançon, france, now lives and works in Geneva) has developed a universe immersed in a hippie and psychedelic aesthetic, in New Age, and in minimalist abstraction, as well as devalued practices such as sewing or DIY.
Through her series of drawings, her films, and her sculptures in wool and other “craft” materials, the artist deploys an aesthetic of "states" rather than of formal or theoretical references, where notions of pleasure and experience find a new force.
order wishlist
Texts by Marco Pasi and Gaëlle Rageot-Deshayes, conversation between Vidya Gastaldon and Timothée Chaillou.
published in July 2016
bilingual edition (English / French)
21 x 23 cm (softcover)
104 pages (color ill.)
25.00 €
ISBN : 978-2-913981-59-1
EAN : 9782913981591
in stock
press releases
Critique d'art, Ophélie Naessens, 2017 (PDF)