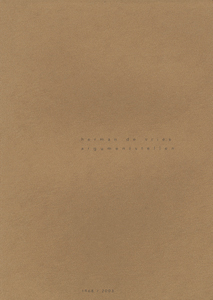 wishlist
A minimalist interpretation of Wittgenstein's Tractatus (artist's book).
Argumentstellen was conceived just one year after Wit weiss (a new version of the White book) and Permutierbarer text (but was published in 2003). It is a direct result of his recent reading of Tractatus. This large format book wherein a minuscule black dot always appears in a different location on the vast blank space of the page, does not treat language as such, but the way in which situation in the space (which is an attribute of all existing things, natural or human) implies a unique point of view each time, a never identical relation to the connection between the things that make up the world. indirectly, however, language is involved to the extent that it is powerless to say that which is never the same. This book visually translates (and illustrates) one of Wittgenstein's propositions (2.0131), quoted on the last page: "a spatial object must be situated in infinite space. (a spatial point is an argument-place)." It foreshadows the series of works on the experience of change and the link between "chance and change" that Herman de Vries explicitly formulates for the first time in 1970 during his long trip to Bombay and the Seychelles, and during which he becomes fully aware of it.
Herman de Vries (born 1931 in Alkmaar, The Netherlands, lives and works in Eschenau, Germany) is a Dutch visual artist. Having started out as an Art Informel painter in the 1950s, his interests shifted in the ensuing years, and in the 1970s, he became focused on found objects from nature and their artistic-philosophical qualities and implications. He has made paintings, collages, texts, sculptures, installations, a.o., and has dealt with plants, earth, and other parts of nature from botanical, medical, historical, as well as psychedelic viewpoints.
wishlist
published in 2003
bilingual edition (German / French)
21 x 29,7 cm (softcover)
48 pages
ISBN : 978-2-914291-17-0
EAN : 9782914291170
sold out 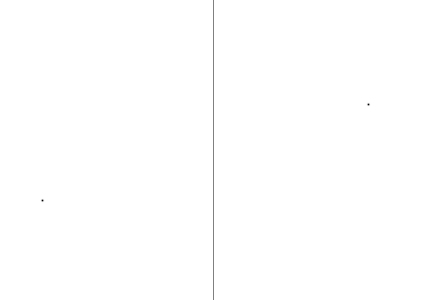