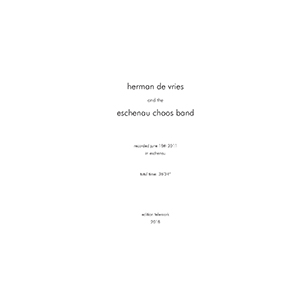 order
wishlist
An improvised musical piece recorded with the friends of Herman de Vries at his 80th birthday's summer party on June 18, 2011, in Eschenau. With liner notes by Herman de Vries and photos of the event on the back sleeve.
“At the summer party on the occasion of my soon-to-be 80th birthday, many friends came. As it said on the invitation: 'The Eschenau Chaos Band will play.' While the party was going on, people asked me when that band would be playing, and I replied: 'now! you are that band', and I randomly handed out all of these instruments. Hartmut Geerken was clued in and had brought some as well—Sun Ra's sun harp among others. I started with a Moroccan hand drum, bendir, and off it went. unpractised.” — Herman de Vries
Herman de Vries (born 1931 in Alkmaar, The Netherlands, lives and works in Eschenau, Germany) is a Dutch visual artist. Having started out as an Art Informel painter in the 1950s, his interests shifted in the ensuing years, and in the 1970s, he became focused on found objects from nature and their artistic-philosophical qualities and implications. He has made paintings, collages, texts, sculptures, installations, a.o., and has dealt with plants, earth, and other parts of nature from botanical, medical, historical, as well as psychedelic viewpoints.
order wishlist
published in May 2018
vinyl LP
1 track (36'34)
24.00 €
in stock