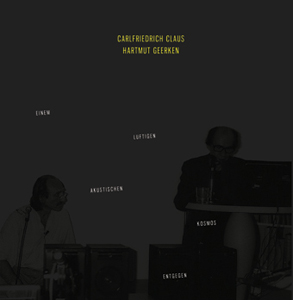 order
wishlist
Collaboration performance by this two infamous German visual and sound artists, writers & sound-poets, recorded at Lyrik-Kabinett München, June 1991.
This is Carlfriedrich Claus' only sound-collaboration ever. Both artists prepared a 60-minute backing-tape and wrote a detailled score for live-performed poetry and voice-operations. In addition to these fixed compositions they left room for spontaneous improvisation and the use of small cymbals ('tschinkas').
This is like nothing else. Very serious, raw and quite unsettling.
Edition of 300 copies.
Comes with 12 page booklet including a text by Hartmut Geerken (German only).
Between the early 1950s and his death in 1998, Carlfriedrich Claus (born 1930 in Annaberg-Buchholz) produced a corpus of work that occupies terrain somewhere between philosophy, art, linguistics and acoustic literature. Both visually with his language sheets and acoustically with his language operations, he plumbed and explored the depths of human consciousness, making a wholly individual contribution to the art of the 20th century in doing so. These sound processes and language operations have a consistency and radicalism unacknowledged hitherto.
Hartmut Geerken (born 1939 in Stuttgart) is an author, composer, musician, film-maker, performer, actor, mycologist, archivist, stager of exhibitions, publisher of numerous authors from the circle of literary expressionism and dada, lumberjack, and bumble-bee-keeper. As a percussionist, he has collaborated with a variety of free jazz musicians such as Sun Ra, John Tchicai, Sainkho Namtchylak. As a poet, he is a practitioner of concrete poetry and organizes events such as the annual Bielefeld New Poetry Colloquium. As an actor, he appeared in six films by Herbert Achternbusch and appeared in two of Achternbusch's plays at the Munich Kammerspiele.
order wishlist
published in October 2011
60'
15.00 €
in stock