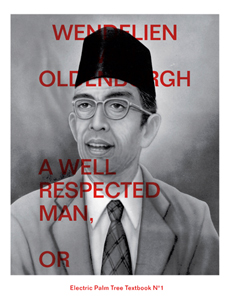 order
wishlist
Artist's book.
The publication unfolds and draws an open-ended connection between individual and collective struggles and (emotional) conflicts intertwined with the colonial and decolonizing histories of Indonesia and the Netherlands by taking two film works by artist Wendelien van Oldenborgh, No False Echoes (2008) and Instruction (2009), as points of departure. Both films take up rarely spoken fragments of the Dutch colonial past, particularly related to Indonesia, that are dormant but still affective in contemporary Dutch society. With the participation of different historical and contemporary stakeholders set against specific built environments, these two films are presented in the form of photo-novels. The film No False Echoes introduces one of the major historical sources cited in full in the publication, that is, a 1913 essay on national freedom by Soewardi Soeryaningrat, an Indonesian nationalist—or “revolutionary”—whose radical position manifested in the essay is widely known in Indonesia. The reprint of this essay is accompanied by two contemporary responses by Lizzy van Leeuwen and Nuraini Juliastuti, which in turn open another text written in 1935 by Soeryaningrat under a different name, Ki Hajar Dewantara, concerning national education in Indonesia. The latter text indicates the shift in political strategies, which, instead of fearless resistance, moves forward toward gradual building of counter-institutions of “upbringing” of new independent subjects.
Electric Palm Tree Textbook N°1.
Wendelien Van Oldenborgh is an artist based in Rotterdam whose practice explores social relations through investigation in the public sphere. Van Oldenborgh often uses the format of an open film shoot, collaborating with participants in different scenarios, to co-produce a script and orient the work towards its final outcome, which can be film or other forms of projection.
order wishlist
Edited by Binna Choi and Wendelien van Oldenborgh.
Texts by Binna Choi, Lizzy van Leeuwen, Nuraini Juliastuti, Wendelien van Oldenborgh, Soewardi Soeryaningrat/Ki Hajar Dewantara.