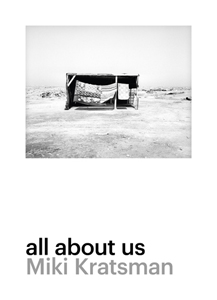 order
New works.
In addition to Miki Kratsman's comprehensive archive, which documents the development of the Israeli-Palestine conflict and its consequences for the daily life of the civil population, his first solo exhibition in Europe focuses on new work that selects the Bedouin population as a central theme. The Bedouin—a minority of the Arabic minority in Israel—have attracted increasing interest in the last years, both from the media and from state-run institutions. The process of integration of the Bedouin into Israeli society occurs on two levels—the formal one, i.e. through governmental policy, and the informal one, i.e. through changing relations with the Israeli society in general and Jewish society in particular.
Published on the occasion of the eponymous exhibition at Ursula Blickle Stiftung, March 6–April 17, 2011.
Miki Kratsman, born 1959 in Argentina, immigrated to Israel in 1971 where he has been living in Tel Aviv since. His photographs are regularly published in the Israeli daily newspaper “Haaretz” in the rubric “The Twilight Zone”. Since 2006, Kratsman has been directing the photography course at the renowned Bezalel Academy of Art and Design in Jerusalem.
Miki Kratsman's photographs show the complex reality of everyday Israeli life and its many different guises and narratives.
order
Foreword by Nicolaus Schafhausen.
Texts by Dana Arieli-Horowitz, Vanessa Joan Müller, Raphael Zagury-Orly.
published in June 2011
bilingual edition (English / German)
17 x 23,5 cm (softcover)
102 pages (52 color ill.)
22.00 €
ISBN : 978-1-934105-45-0
EAN : 9781934105450
in stock