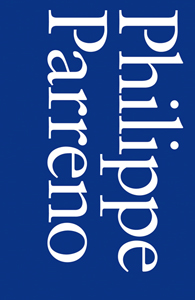 order
wishlist
A selection of Parreno's films and collaborative projects.
Philippe Parreno is a catalogue that accompanies the fourth exhibition that makes up a retrospective of Parreno's work. Starting at Kunsthalle Zürich, it has since traveled to the Centre Pompidou in Paris (see the reference monograph which has been published on this occasion) and the Irish Museum of Modern Art in Dublin.
This publication focuses on “Philippe Parreno,” an exhibition at the Center for Curatorial Studies at Bard College. Curated by Maria Lind, the exhibition consists of a selection of Parreno's films and collaborative projects, such as June 8, 1968 (2009), which reinterprets Robert F. Kennedy's funeral train procession; Zidane: A XXIst Century Portrait (2006), a full-length portrait of a soccer player, made in collaboration with Douglas Gordon; Anywhere Out of the World (2000); and No Ghost, Just a Shell (1999-2002), a project by Parreno and Pierre Huyghe, in which they purchased the rights to a Japanese manga character named Annlee. During the exhibition, Annlee's rights will be reconsidered in an imaginary trial. Testimonies will be given by Annlee, Philippe Parreno, Pierre Huyghe, Maria Lind, Hans Ulrich Obrist, Liam Gillick, Claire Bishop, and others. In addition, an intensive program of lectures, seminars, and moderated projects will take place in conjunction with the exhibition. These events, as well as contributing texts by Maria Lind, Tom Eccles, Simon Critchley, Jörn Schaffaff, and several CCS graduate students are concentrated and further elucidated in this catalogue.
Published on the occasion of the exhibition at the Center for Curatorial Studies at Bard College, NY, from June to September 2010.
Philippe Parreno, French artist, was born in 1964 in Oran (Algeria).
order wishlist
Edited by Maria Lind.
Contributions by Simon Critchley, Tom Eccles, Maria Lind, Christina Linden, Jörn Schafaff.
published in September 2010
English edition
12 x 18,5 cm (softcover)
44 pages (4 color and 1 b/w ill.)
12.00 €
ISBN : 978-1-934105-13-9
EAN : 9781934105139
in stock
Philippe Parreno: other titles