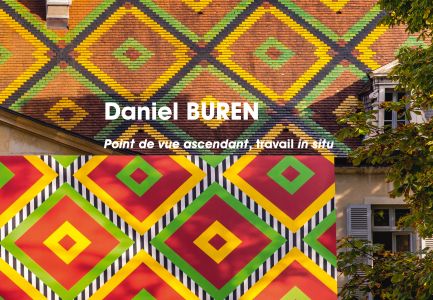 order
wishlist
New monograph, centered around a temporary work in situ by Daniel Buren, allowing to further explore the close relationship that the artist weaves with architecture, landscape but also points of view.
This new monographic work dedicated to Daniel Buren is centered around his piece Ascending Point of View, work in situ displayed in the garden of the Banque de France in Dijon from December 2021 to December 2022. This temporary piece, produced by Interface, allows to further explore the concept of in situ and the close relationship that the artist weaves with architecture, landscape but also points of view as well as the position of the viewer, particularly when put at a distance. The book, which places this latest work in context with numerous previous works dating from the 1960s to the present day, reveals the way Daniel Buren uses framing and perspective, sometimes masking physicality to better reveal it. The extensive iconography of the work designed for Dijon provides an opportunity to discover numerous "snapshots" at very different seasons and times of day. Two texts accompany this new production. The first one, written by Frédéric Buisson, artistic director of Interface and curator of this exhibition, allows us to understand his particular relationship with Daniel Buren and to grasp the genesis of the project. The second, by Nicolas-Xavier Ferrand, PhD in art history and researcher for the Bourse de Commerce - Pinault Collection, analyzes in greater detail the notion of in situ and in particular the artist's singular relationship to perspective in relation to its representation in the history of painting.
Co-founder of the BMTP group, Daniel Buren, born 1939 in Boulogne-Billancourt, France, realizes works in situ and often transitory.
order wishlist
Texts by Frédéric Buisson, Nicolas-Xavier Ferrand, Roland de la Brosse.