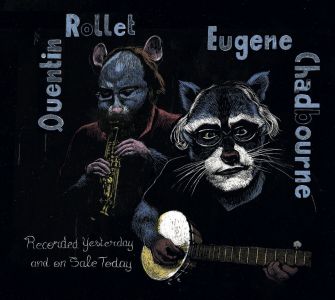 Quentin Rollet (born 1974) started playing the alto saxophone at the age of 11 and the sopranino saxophone at 37. After a few years spent unlearning the teaching of the conservatory, he devoted himself solely to free improvisation. This led him to play on record or on stage with groups as varied as Nurse With Wound, Prohibition, The Red Krayola, Mendelson, David Grubbs, Herman Dune, Akosh S. Unit, Thierry Müller, Rubin Steiner, eRikm, Jac Berrocal, Andrew Liles... He is the co-founder of the labels Rectangle (with Noël Akchoté), reQords and Bisou Records.
Eugene Chadbourne (born 1954 in Mount Vernont, USA) is an American guitarist and music critic. Chadbourne grew up in Boulder, Colorado, and started playing guitar at eleven years old. After a few years playing in a rock band, he began to take an interest in jazz and avant-garde music and started to write about music. At some point, Anthony Braxton told Chadbourne to focus on music rather than journalism, which he did. To avoid military service during the Vietnam War, he moved to Canada in the early 1970s, then moved back to New York where he met John Zorn. The theme of the war will come back often in his songs and in his books. He devoted himself largely to free improvisation and released his first solo album in 1976 on his own label Parachute. In the early 80's, he founded the rock band Shockabilly with Kramer and David Licht. Playing guitar, dobro, banjo and even electric rake (instrument he invented), he navigates between musical styles: pop songs, Country & Western, free improvisations with many musicians of the contemporary jazz scene (Han Bennink, Anthony Braxton, Fred Frith, Alex Ward), covers of all kinds (Nick Drake, Ornette Coleman, and even Johann Sebastian Bach banjo!). He tours regularly in the United States and Europe, solo, duet with drummers (Jimmy Carl Black, Paul Lovens...) or in larger formations.
order wishlist
Mastered by Patrick Müller.
Cover art: Mika Pusse.
published in March 2022
12.00 €
in stock