California Condors, Boris Karloff as Frankenstein, Japanese horror films, and Gordon Matta-Clark have served as some of the various influences that make up the daring world of Rodarte. In only five years, Rodarte has upended the fashion scene, bringing Kate and Laura Mulleavy, the designers behind Rodarte, to the forefront of the discussion about contemporary design and visual culture.
Kate and Laura, who live and work between downtown Los Angeles and Pasadena, California, were educated at the University of California at Berkeley and have consistently brought their love of nature, film, art, and science to bear in their unconventional and exquisitely crafted collections for Rodarte. Burning, sanding, dyeing, knitting, twisting, staining, and weaving are some of the many complex techniques that have entered into the Rodarte textural vocabulary. Kate and Laura's past collaborations with artists, actors, musicians, and writers such as Miranda July, Ryan McGinley, Autumn de Wilde, Ari Marcopoulos, and Natalie Portman have set them apart since the beginning of their career. 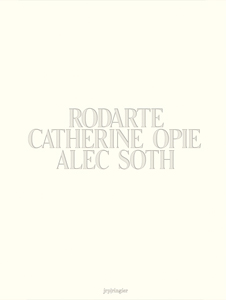