Since the mid-1960s, Ed Ruscha has developed an iconic body of works, simultaneously as a painter, a photographer (with such historical books as "Twenty-Six Gasolines Stations," 1963), a filmmaker, and an acute commentator of American culture. Born in 1937 and based in Los Angeles, he is a key figure of the last few decades and one of the first artists to have introduced a critique of popular culture and an examination of language into the visual arts. 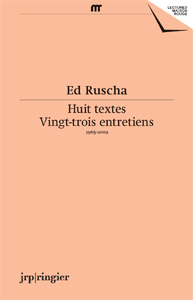