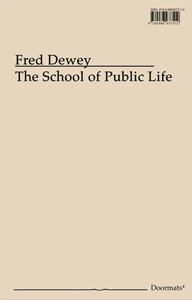 order
wishlist
Rethinking public space.
Built out of two decades of interventions in politics and culture, The School of Public Life records the author's efforts to revive and rethink public space from Los Angeles, Lowndes County, Alabama and Cork, Ireland to current day Berlin and beyond. Drawing on manifestoes, lectures, letters, soap box incantations, and experimental texts, delivered in different situations and moments, the book chronicles one person's efforts to focus on and secure what is attacked and simulated from every direction: the power of the people. From work in the neighborhood councils movement and directing a space for culture in Los Angeles, to examining the people's need for poetic description and the relationship of time to existential politics, the book seeks to re-examine community life, art, history, and principles of selfgovernment against the abyss of economics, parties, and constructed powerlessness. The book explores the works of thinker Hannah Arendt, the poet Charles Olson, dancer and poet Simone Forti and lessons to be drawn from the New England town meeting, artist Joseph Beuys' Office for Direct Democracy, the Lowndes County Freedom Organization in Alabama, experiments at Black Mountain College and Beyond Baroque, and Rosa Parks and the Montgomery bus boycott. Through these, The School of Public Life pursues a live reframing of responsibility and engagement in this world and no other. How does public life encourage thinking, action, and imagination? What is wrong with mere concepts? How might culture actualize the people and public life? How do we respond to, and understand, powerlessness? Why is protest utterly inadequate? How might theory and culture help us discover our existing power? The School of Public Life addresses old and new principles of a democracy and a republic, not as clichés and propaganda but as vital for a new era of politics, art, and courage.
The School of Public Life is the fourth issue of the book series Doormats published by Errant Bodies Press. The series aims at contributing to the now, addressing issues that are present and that demand presence.
Fred Dewey was a writer, teacher, editor/publisher, curator, and co-founder of the Neighborhood Councils Movement in Los An geles. He directed Beyond Baroque Literary / Arts Center in Los Angeles from 1995-2010 and has edited, published, and designed twenty books and anthologies, featuring work by Ammiel Alcalay, Simone Forti, Jean-Luc Godard, Daniel Berrigan, Abdellatif Laabi, Jack Hirschman, Christoph Draeger, Ed Ruscha, Diane di Prima, and more. His writing has appeared in the anthologies Architecture of Fear (Princeton Architecture), Most Art Sucks (Smart Art), Cork Caucus, and in magazines and newspapers such as the Neighborhood Councils Movement Newsletter, the Journal of Aesthetics & Protest, New Statesman, LA Weekly, LA Times, Metropolis, Venice Beachhead, LA Forum for Architecture & Urban Design, and Coagula. Dewey has performed with the dancers and artists Simone Forti and Jeremiah Day at London's ICA, New York's Ludlow 38, and Berlin's Errant Bodies. He taught in Berlin and in the graduate fine art program at ArtCenter College of Design in Pasadena, California.
order wishlist
published in September 2014
English edition
11,4 x 17,8 cm (softcover)
288 pages
12.00 €
ISBN : 978-0-9889375-1-2
EAN : 9780988937512
in stock