Tadeusz Kantor (1915-1990) is regarded as one of the most significant Polish artists of the 20th century. He was among those artists who proclaimed and practiced a concept of art, transgressing all its boundaries. Alongside his work as a visual artist he was also a theater reformer influenced by the avant-garde. Kantor attained world renown in the 1970s with the traveling theater group Cricot 2, which he established in the mid-1950s. The artist was invited to Documenta 2 (1959 ) and 6 (1977). Today Kantor is often mentioned as a source of inspiration by artists interested in his performative approach of contemporary art. 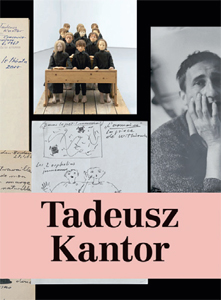 untitled
2009
English edition
JRP|Editions - Monographs
sold out
A comprehensive overview of Kantor's versatility, from his theater productions and actions to his painterly and sculptural works.