An early progenitor of the artist's book genre, Warja Honegger-Lavater was born in Winterthur, Switzerland in 1913. She worked as an illustrator for the magazine Jeunesse from 1944-1958, and moved to New York shortly thereafter where she began a wonderful series of artist's books.
These books were published between 1962 and 1971, an exceptionally ripe time for artists to turn to the bookform, a time when the most often cited "first" artist's book also appeared, Twentysix Gasoline Stations (1962) by Ed Ruscha.
All of Honegger-Lavater's books are made using the accordion-fold binding. Her aesthetic has been aptly described as "very clean, very Swiss." Each book tells a story, sequentially, like traditional books, but varying from them by rarely using words. Instead she chooses a symbol to represent, for example, a character, as in the red dot standing in for Red Riding Hood in Little Red Riding Hood. 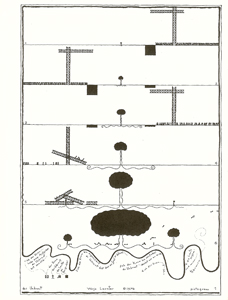