Born in Munich in 1956, Michaela Melián is an artist and musician based in Upper Bavaria. She studied music and art in Munich and London. From 1980–86 she co-edited the magazine Mode und Verzweiflung. As a musician in the band F.S.K. she has toured Europe and the United States. Numerous recordings with F.S.K. and others. Audiovisual projects with David Moufang (Move D) and Thomas Meinecke. Numerous solo and group exhibitions, including Kunstwerke Berlin (2005), Kunsthalle Baden-Baden (2004), Werkleitz Biennale, Halle (2004), Kunstverein München, Munich (2004), Galerie im Taxispalais, Innsbruck (2003) and Villa Arson, Nice (2002). Recent publications include Baden-Baden (CD/LP, Monika Enterprise, Berlin, 2004). In 1998 and 1999 she held the post of Visiting Professor at the Academy of Art in Munich. 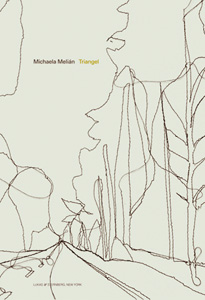 Triangel
2003
bilingual edition (English / German)
Sternberg Press - Monographs and artists' books
19.00 15.00 €
This catalogue is the most comprehensive treatment of Michaela Melián's œuvre to date and constitutes, with numerous essays and illustrations, a long due documentation of the German artist's work.