In her sculptures, which often incorporate photographic elements and objects, Rachel Harrison (*1966, in New York) thematizes the complexity of art in a humorous manner, playing with the observer's appetite for decoding meanings. If she makes connections with the current discourses on sculpture and installation, her works remain difficult to characterize. Her unfailingly virtuoso sculptures are often constructed in colorfully painted organic-amorphous forms, serving as mounts for readymades – whether lifestyle magazines, Calvin Klein underwear packaging, or found photographs – appearing both finished and unfinished, thus extremely fragile and ephemeral. The unexpected mix of materials links kitsch and formalism with a cynical wink of the eye. 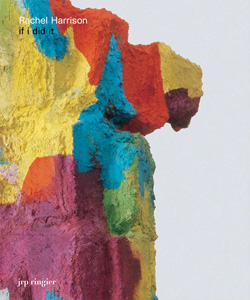 If I did it
2007
bilingual edition (English / German)
JRP|Editions - Monographs
Comprehensive monograph highlighting a new group of sculptures.