Bastien Aubry (born 1974 in Saint-Imier, Switzerland) attended the Ecole d'Arts Visuels Berne et Bienne, Switzerland. Since 2010 he is part of the artist group Aubry Broquard (he also founded with Dimitri Broquard the FLAG design studio in 2002), which has been included in numerous exhibitions internationally, including the Swiss Institute of Contemporary Art in New York and MABA in Paris. Since 2017, Bastien Aubry continues his sculptural practice as a solo artist.
Bastien Aubry's artistic approach consists of alienating everyday objects in a playful and ironic way. His mischievous works evoke fascinating visual effects by mixing design, art history and pop culture. His creations celebrate the poetry of failure and the beauty of the less than perfect, an accident by design. The artist stages reality in his own world, exposing everyday absurdities and toying with the boundaries set by traditional artistic practices. Three-dimensional works are constrained by the material they are made of, and for Bastien Aubry, it is most important to recognize the physical property of each material in order to experiment with visually exiting effects. To exaggerate, enlarge, stack, fill, crush… There is always an element of surprise and spontaneity present in his oeuvre. 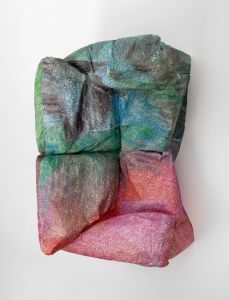